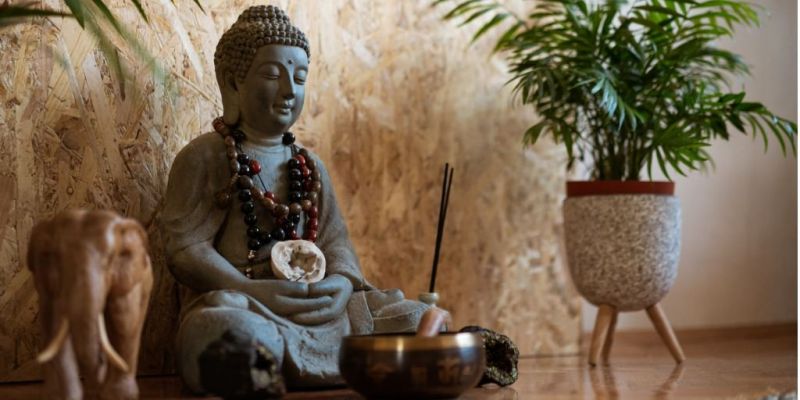 There is an immense amount of suffering on the planet that comes from neglect for the present moment. Why do we neglect the present moment? As the ancient stoic Seneca said, “We suffer more often in imagination than in reality.” The idea here is that we suffer because, instead of noticing the myriad of gifts available to us in the present moment, we blast ourselves with the prospect of some wrong that could come upon us. And though the above quote is from a stoic philosopher, it’s an appropriate foothold to transition into the power of Buddhist practices in the face of uncertain times (Stoicism and Buddhism hold similarities in both philosophy and practice after all).

We are all currently coping with a global pandemic, and it can be helpful to study what Buddhists have used through the ages to transforms and carry themselves through unstable moments in history such as war, loss, and so on.

Study these 5 components of Buddhism. Put them to practice and you’ll experience a notable shift in your being.

The first obvious of the Buddhist practices to cover is meditation. What is meditation to a Buddhist? Let’s look to the words of the Dalai Lama:

“All human beings have an innate desire to overcome suffering, to find happiness. Training the mind to think differently, through meditation, is one important way to avoid suffering and be happy.”

Meditation is an effective way to sit with whatever suffering, overthinking, or worries that are present so might they be overridden with a touch of mindfulness. The idea isn’t to sit and resist hard feelings, nor is it to try to forcefully overcome them. The goal is to become a passive observer of whatever comes up, to accept any difficult sensations.

If you’re interested in meditation, you may wish to purchase a book, learn on Youtube, or even find a sangha meditation group in your area. Also, you may wish to attend our June 2021 journey to Ladakh with spiritual author Andrew Harvey, where we’ll be learning about meditation and in general, the spiritual tradition of Tibetan Buddhism. In October of 2021, we’ll also be taking a journey to India and Nepal called Finding Buddha with Dr. Miles Neale and Special Guest Geshe Tenzin Zopa.

A group of Tibetan Buddhist monks from Drepung Gomang Monastic University in India have recently received a lot of attention for their worldwide artistic endeavors. They’ve been traveling to universities around the world and spending weeks completing extremely intricate mandalas made from sand. What do they do when they’re finished? They destroy them within seconds as a powerful display of the impermanence of life.

Mandalas are a display of deep reminders of guiding principles and wisdom. They’re symbolic pictures of the universe that, to the Tibetan Buddhist, enlighten the mind.

The mandala can serve as an everyday reminder that despite our worries, there is a bigger picture at the center of what is happening, whether it be in our lives or in the world at large. We can always take refuge in the kingdom of meditative imagery and with enough practice, enlightenment.

Chanting is one of the Buddhist practices that steadies the mind and prepares it for meditation. Chanting also serves as an incantation toward ritual and for promoting specific qualities in practitioners. These qualities can relate to attributes of the Buddha as well as specific precepts and virtues described in Buddhist dharma. For example, in Tibetan Buddhism, the six-syllable Om mani padme hum is associated with the bodhisattva of compassion, Avalokiteshvara. When chanted, it is thought that this incantation compresses all of the Buddhist teachings.

So how can chanting help us? Well, scientific studies are beginning to prove it’s psychological benefits. In a 2019 study published in Nature, researchers concluded that “in addition to the difference in brain activity, our results also showed that religious chanting can increase the stability of cardiac function, compared to the resting state. The HRV analysis is sensitive to changes in autonomic nervous system activity. The reactivity of the autonomic nervous system, approximated through [heart rate variability] HRV changes, has been linked to positive and negative moods. The observed decrease in HRV during religious chanting is a very plausible finding in the context of the accompanying feelings of spiritual bliss and emotional tranquility.”

The calming effects of chanting are similar to that of meditation. For those who practice a faith/religion, chanting is a good way to put that spirituality to use and can even “trick” the mind into entering a blissful, trance-like state that can be harder to reach through simple mindfulness meditation.

In Buddhism, both change and suffering are part of the Three Signs of Being, also called the Three Marks of Existence.

Understanding change and suffering and how they operate in our lives can help neutralize the neurosis in our minds and the suffering we experience because of it.

Buddhist practices teach us that change is a constant in the universe. This means that, in our lives, things can go from bad to good and from good to bad. This is normal, Buddhism teaches. This is life. Understanding this can help us be more accepting of change and help us find joy where it matters rather than in materialistic things. Human connection, our spirituality, and our health are all things we can take refuge in (although they too can change).

In Buddhism, there is something called The Three Jewels. They are The Buddha (fully enlightened one), Dharma (teachings of the Buddha), and Sangha (a group of like-minded people who live/practice together). Understanding these Jewels can help mitigate the impact of change and suffering, which is a key objective of Buddhism in general. Let’s go over each of them.

1. The Buddha: “Taking refuge” in the Buddha really means setting him as a prime, spiritual example. The historical Buddha is a figure who transcended suffering by following the path of deep mindfulness and meditation.

3. Sangha: Sangha means community. It’s a place to take refuge, to share the labors of spiritual practice with others. Thich Nhat Hanh said, “The sangha is not a place to hide in order to avoid your responsibilities. The sangha is a place to practice for the transformation and the healing of self and society. When you are strong, you can be there in order to help society. If your society is in trouble, if your family is broken, if your church is no longer capable of providing you with spiritual life, then you work to take refuge in the sangha so that you can restore your strength, your understanding, your compassion, your confidence.”

The Three Jewels, like the rest of the 5 Buddhist practices and techniques, can be utilized to bring steadiness to your being during these uncertain times. Choosing the path of mindfulness ultimately amounts to choosing a life of peace, wisdom, and resilience, even during something as terrible as a global pandemic.