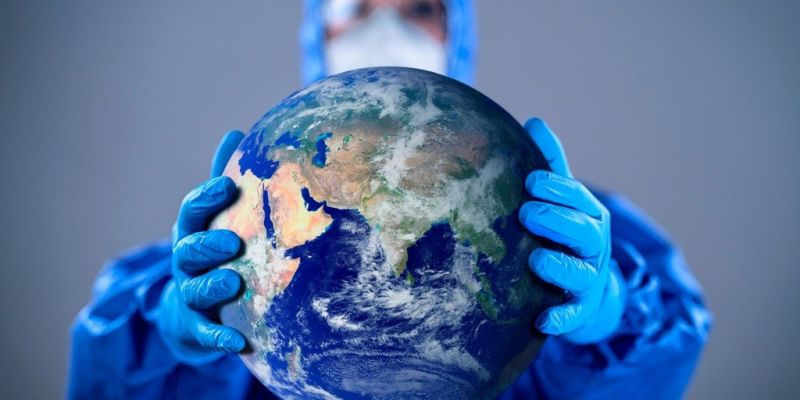 It is very rare that human beings have a chance to rethink our place in Nature. The modern world is the fruit of a worldview that has placed Homo sapiens reigning supreme over all other life forms.  This worldview seems only right and proper to the vast majority of people. In the course of just a few weeks, however, over seven billion people’s lives changed for the worse.  Economies were halted, global transportation and supply chains were shut down to a crawl, and hundreds of millions of jobs were lost. More money has been lost globally than in any other moment in history. Amid the shock and panic, the catastrophe of COVID-19 has prompted some radical rethinking. Can a new and better world emerge? Not unless our worldview changes, because in many ways the virus isn’t a mindless primitive life form ravaging us, “the most superior life form on the planet”. Nor did Nature strike back to punish us. Something deeper is going on. To see what it is, we need to consider a worldview based not on humans-as-supreme, but on life-as-supreme.

We must realize that our superiority complex has quite literally put us in opposition to life on earth.  Climate change can be laid at our doorstep. The prediction of the Earth’s sixth mass extinction is more than plausible, and 50% of biodiversity in plants and animals has been eliminated in mere decades, while hundreds of indigenous cultures have been virtually wiped out. The destructive human machine has been inexorable so far. The collective voices of Richard Attenborough and one million non-profits and NGOs have proved inadequate agents of change. There was no global pause.

Then, in January the world caught news of a virus, a new variant of a coronavirus, a family of viruses that has been with us for well over a thousand years.  At no point did any science suggest, nor any public official report, that this virus would poison our ecosystems and threaten the survival of humans and much other life on the planet in the coming years.  Instead, we were told that the virus would contribute to the passing of the millions of people that die of a myriad of respiratory illnesses every year.  The death toll from the virus (even at its most hyperbolic predictions) would be a fraction of the deaths from chronic diseases that result each year from our polluted and depleted soil, water, air, and food systems.  Nonetheless, this new threat was suddenly enough.  We paused.

If we needed more evidence that we are a shortsighted and self-interested species, it is here, but there is no time for self-condemnation.  While the world’s leaders struggle to sort out the true implications of this virus, we have an opportunity to finally learn from our mistakes.  The lesson is being taught by the humblest of messengers, a microscopic speck of genetic material.  The virus is not our enemy—if we let it, it will be our greatest teacher.

First, we need to learn that the emergence of this coronavirus adaptation was predictable, and from Nature’s viewpoint, which oversees all living things, it was even necessary.  As the stress levels of an organism increase, the speed of adaptation has to increase if it is to find a solution and survive.  Since the beginning of life, the most significant biologic adaptations have been achieved through the viral communication network.  Every form of DNA is constantly in touch with every other form. From bacteria in soils and water systems to the cells in our bodies, rapid transmission of new genetic updates can save a species from a new threat.

If you adopt the perspective of life itself, earth is dominated by the genes of bacteria, fungi, and protozoa which hugely outnumber any other life forms. This vast microbial genome is the foundation of life on the planet, and its aim, as with all life forms, is to adapt, survive, and foster diversity. To the life force that is in the 1030 bacteria in existence, a major threat—we would argue that it is the major threat—is coming from the widespread, indiscriminate use of antibiotics in agriculture via animal feed and the management of poultry, swine, and cattle.

As the collective bacterial stress levels increases, DNA “misspelling” (i.e., mistakes in reproduction) creates billions of trial-and error genetic variations.  When a survival advantage is discovered (such as antibiotic resistance in a strain of bacteria), that beneficial gene can be transferred in various ways across many species, but for maximum impact over great distances, viral transfer is the vehicle of choice.  Thus, millions of species of microorganisms work toward one goal, which isn’t to harm us, but to maintain a stable biodiverse ecosystem everywhere on earth.

The upshot is the change of worldview mentioned at the outset. A viable, balanced, dynamic, healthy microbiome (the sum total of all micro-organisms) benefits human beings far more than our self-centered, shortsighted focus on money, power, war, nationalism, endless consumerism chained to massive pollution, and the chemical degradation of our air, food, and water.

Viruses have long dispersed their vital genetic information throughout the planet via air and water currents.   The messages they carry are picked up by many species, including us., Each individual takes up a viral load on the basis of its own stress levels.  For many people there are no clinical signs or symptoms of acute illness as cells of various organ systems integrate or reject the new genetic data, while for others the viral stress signal can call up an immune response from cell populations. Life adapts, and we humans are made more resilient by the encounter.  That is how viral communication has worked for billions of years, and the latest findings have revealed that our own genome was built by genetic data from bacteria, fungi and other multicellular species. In concert they created the profound complexity and resilience of human biology.

But we have changed the playing field for the critical balance of viral communication, and COVID-19, when seen on a global scale, represents the continued effort of the four-billion-year-old microbiome seeking to put things right.  In the old worldview, this is irrelevant. The only measure has been an either-or choice: Either things are good for human prosperity or bad for it. In the new worldview, there is no either-or. What is good for the global microbiome is good for the planet and for us. As self-aware creatures, we can support life or diminish its chance for survival. In short, a new world, if it emerges in the coming decade, will make choices that benefit the microbiome and us at the same time.

It will take a shift in worldview for that to transpire. The separate elements for global healing are already present and known to everyone. But humans can be perverse as well as shortsighted. Achieving the abolition of global pesticides, herbicides, indiscriminate antibiotics, and carbon emissions is essential, and only our irrational resistance to reality, bound up with an outmoded, self-destructive worldview, keeps us on the downward path. The pleas for life-enhancing choices has proved ineffectual so far. In the name of healing and the salvation of life on Earth, no one can alter the course of destruction except us.

New York Times bestselling author Deepak Chopra unlocks the secrets to moving beyond our present limitations to access a field of infinite possibilities. How does one do this? By becoming metahuman. To be metahuman, however, isn’t science fiction and is certainly not about being a superhero. To be metahuman means to move past the limitation constructed by the mind and enter a new state of awareness where we have deliberate and concrete access to peak experiences that can transform people’s lives from the inside out.