A Renewed Planet Starts With Food 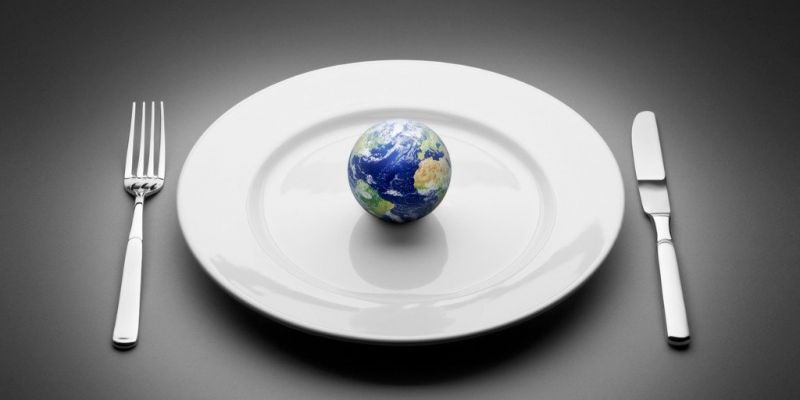 The way we eat has changed the planet. In this simple idea, which few of us consider when we go to the grocery store, lies immense hope for the future—if we pay attention. On the medical front a large number of people accept the notion, once thought of as a fringe belief, that “you are what you eat.” The decisions you make today about what you eat will have a huge impact in your future health. Food plays a decisive factor in modern lifestyle diseases like type 2 diabetes, heart disease, and all the damaging side effects related to the epidemic of obesity in this country.

The next step in our growing awareness expands on the same idea. The next bite you take adds to the health of planet Earth or pushes it a tiny step toward deterioration. Unconscious eating is bad for the environment. Conscious eating puts the planet on the road to renewal and wellness.

We can heal the environment by thinking from the ground up, quite literally. The health of soils around the world is essential to keeping the entire planet in balance. This truth has dawned with the rise of the word “microbiome,” which is gaining wide circulation. The microbiome is comprised of the genetic material of all microorganisms (bacteria, fungi and viruses) in a specific place, such as the human gut, in the soil, in water, or on the skin. Each local microbiome is intricately connected to other microbiomes, thereby linking all living organisms together.

New ideas are a motivation for rethinking old ideas, and this happened with a vengeance when the microbiome idea emerged. To give a short list of mental resets that have occurred:

Old idea: Germs are dangerous and exist to attack human beings to make them sick.

Rethink: The microbiome is hugely beneficial in keeping every living thing in a state of health and balance.

Old idea: Germs invade the body like enemies from without.

Rethink: Thousands of species of micro-organisms inhabit the body and work intimately to keep us healthy, beginning with the digestion of food.

Old idea: Humans are free to dominate and change Nature according to what we want to do.

Rethink: Human survival depends on remaining in balance with Nature, who is the great sustainer and healer.

That last rethink is the big one. Greenhouse gases told us that how we live has planetary consequences. The planetary biome tells us the same thing, and for much the same reason. The industrialization of human life gave rise to excess carbon dioxide in the air. The industrialization of food production, which has exponentially increased around the world, has proceeded with reckless disregard for the planetary biome, particularly the health of soils.

Here are the trends that pose the most worry, keeping in mind that we have the power to reverse them:

On the one hand these measures have produced an enormous quantity of food and established a food delivery chain capable of feeding 7 billion people and counting. But as with our carbon footprint, there are immense drawbacks at the same time.

The speed and virulence of the spread of the novel coronavirus represents the kind of drastic disruption that can occur when one microbiome in Wuhan, China goes out of balance. There have been near misses, too, notably the SARS outbreak in Asia in 2003 and the 2013 Ebola outbreak in Africa. Someone has grimly called COVID-19 a “starter pandemic.”

It is now being dealt with on an industrial level with a global vaccination program, but we can’t afford to slip back into two old outworn ideas, that microbes are our enemy and that we should fight them with all-out war. The planetary biome is what keeps microbial life in balance, and Nature is the only force large enough to do the job. For billions of years a biome consisting of billions of species at the microscopic level has existed in balance.

However long it takes, humans will learn to think about the planetary biome. It’s part of the same planetary thinking that climate change has motived. Awareness is the first step toward change, and here we are concerned with changing your awareness. But action follows. The individual consumer holds the levers of power, and if you eat consciously, you are nudging the food supply system in the right direction.

Conscious eating means whole organic foods, locally sourced and raised with consideration for healthy farming, healthy soils, and healthy livestock raised as close to Nature as possible. We know that this sounds like a dream. Groceries are dominated by processed food, chemical additives, and all manner of produce and meat that uses antibiotics, chemical fertilizers, and pesticides in their production.

One might say, with some justification, that balance is what lies in the balance. There is no reason why Nature should be the source of balance while humans are the cause for imbalance. But that’s the present reality, just as willfully extracting natural resources is the prevailing mindset. Humans are brilliant at solving problems. We are also notorious for waiting until the last minute before facing a big problem.

What makes a planetary issue like the biome different this time around is that it is really an awareness issue. Nothing like the discovery of penicillin is going to work. Only a shift in awareness will work, and such a shift occurs one person at a time until a critical mass is reached and the whole population clamors for change. Consider this moment a tipping point in the making. Changing your eating habits looks like a small step, but the change in your awareness has momentous consequences.

Rajnish Khanna, Ph.D., founder and Chief Executive Officer of i-Cultiver, Inc. and Global Food Scholar, Inc. Rajnish has served as a lead scientist in biotechnology industry and has worked at the University of California, Berkeley and Carnegie Institution for Science at Stanford University. Rajnish is a strategic biotechnology consultant, plant and soil health scientist applying multidisciplinary approaches for research and development. Known for empowering the industry through strategic partnerships with academic institutions to leverage advanced technologies, increase technology transfer and product impact. Rajnish is creating the online local food marketing platform, TerreLocal, to digitally map food supply with local demand. Rajnish is a photobiologist, interested in how information, such as light, is perceived and translated by organisms into biological responses.www.rajnishkhanna.com

Poonacha Machaiah is the CEO of The Chopra Foundation, a 501(c) (3) organization and co-founder of the Never Alone Movement for Suicide Prevention and Mental Health along with both world-renowned mind-body medicine pioneer and New York Times best-selling author Deepak Chopra, M.D, actress and humanitarian Gabriella Wright.

Poonacha launched the Warrior Monk brand targeted at creating a positive societal shift through the compassionate transformation of humankind (www.thewarriormonk.com). He is the founder of Wellbeing Tech, a leading technology innovation company that has deployed transformative wellbeing solutions such as the hyper-local neighborhood app i.e. GABL (www.gabl.global) and Remote Assistance Management platform for providing assisted reality with Glass Enterprise edition (www.wellbeingtech.com/ramp).

He holds an MBA from the College of William and Mary, and a Bachelor of Science in Computer Science and Engineering from the B.M.S. College of Engineering.