How to Be Good - A Very Tough Problem 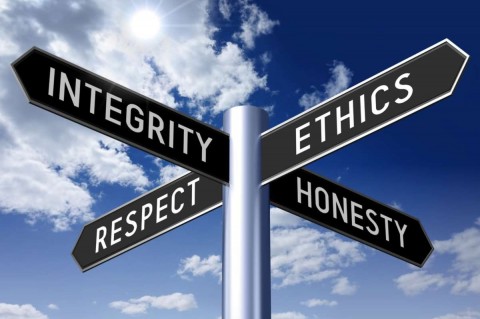 At the turn of a new year it’s natural to be reflective about the state of the world, a gloomy process this year. The world is filled with bad actors, who are easy to condemn. But complaining about them does us very little good, while a great deal of good can be done by flipping the coin and asking what it takes to be good.

To have a grounded sense of self, it’s necessary to feel that you are a good person. People who consider themselves bad are generally defeated and abused, wracked with guilt and shame. So where does goodness come from? This turns out to be one of the toughest problems tackled by religion, philosophy, and now science. Finding a scientific way to make people act morally is a long-standing dream going back at least two centuries when Utilitarians tried to base morality on a calculus of pleasure and pain. The notion that making goodness a pleasant experience seemed fruitful, especially combined with painful punishments when someone disobeys the moral rules.

Reinforcing pleasure and punishing with pain works when training animals and perhaps small children. But as we all know from willful two-year-olds, it’s possible to take perverse pleasure in disobeying the rules. Perversity is the outcome of free will, and there’s the rub. Human nature is too complicated to predict anyone’s choice of behavior, much less quantify it with scientific calculations. If you think of yourself as a good person, there isn’t a single cause behind your moral self-approval but instead a cloud of causes, including the following:

Biology: We are set up to avoid pain, so a morality that minimizes aggression naturally evolved. The cerebral cortex reflects rationality, the lower brain a more atavistic set of impulses. The reflective side of our nature recognizes that unbridled aggression, sexual predation, and constant vigilance against external threats are untenable. This gives grounds for subduing primitive urges, but this has been a tenuous detente at best.

Psychology: Children develop as moral creatures in stages, based on bonding with their parents. In a pre-moral child, there is no inner guidance that modifies raw impulses. But by age eight or nine "being good" has been internalized as something the child wants, not simply an imposition by a parent. The next stages are all inner-directed, if they are to develop at all, resting on the foundation of empathy.

Social conditioning: Using one's own powers of thinking and feeling to become moral is such a formidable task that we all depend on second-hand conditioning. Wanting to fit in, we learn the codes of behavior that promote conformity. Much of shared morality is therefore unexamined, if not outright robotic. Few societies reward the individual who doesn't fit in.

Ego drives: Ego is at odds with fixed morality, being driven by personal and private desires that center on strengthening "I, me, and mine." Society allows for conflict and competition as well as communion and cooperation. The ego can be gratified by both sides of this equation, yet it harbors its own agenda always, regardless of morality.

Ulterior motives: Higher authorities use moral persuasion, pressure, and violence to enforce rules that keep them in the driver’s seat. Moral absolutism is generally associated with rule-based religions, where a divine authority tells human worshipers how to live. This was considered a workable system, and still is by fundamentalists who take scripture literally.

Into this mix one must consider the traditions of moral philosophy, law, justice, and other “higher” codes of civilization, which are generally protected by educated elites. There is also the whole irrational field of tribalism, nationalism, and fanatical religion, which makes it "good" to hurt "them" and protect "us."

As soon as you realize that every religion is mind-made, and that the God or gods you believe in are relative to the society you were born into, absolute morality falls apart. There has been a strong strain of believers in “natural” morality. They may see sermons in stones, meaning that Nature is their moral teacher (Darwinism and the struggle to survive did this school in). To update natural morality, there is sometimes an attempt to scientize the whole problem, as in Michael Shermer’s recent book, The Moral Arc, where he attempts to find an objective basis for morality.

The foundation for Shermer’s belief is Darwinian, claiming that being good gave individuals the best chance to survive and thrive. There are a dozen ways to explode his hypothesis, beginning with the mismatch between ant colonies, where physical survival is the ultimate test, and human society. Being self-aware, we can watch moral codes being created, flouted, overwhelmed, modified, and destroyed. This is entirely mind-made, and one trick about free will is that what the mind makes it can change in any way.

People who search futilely for moral laws and principles feel insecure about the possibilities of human nature. Their fear isn’t groundless. Freud died in a pessimistic mood, concluding that civilized behavior was a thin veneer, constantly under threat from the dark unconscious and its ungovernable drive toward aggression and death. But mind-made morality isn’t a fraud or delusion or a power play by authority figures. There is a sound argument for “natural” morality that exists in the opposite direction from where Shermer is looking, going inward instead of outward.

Life gains meaning and purpose from the inside out. Love, compassion, altruism, heroism, self-sacrifice, gratitude, gracefulness, honesty, and generosity—all the values we associate with being good—arise naturally once we decide to seek them in ourselves. Holding a higher vision of what it means to be human is what it means to be human. Survival, in the Darwinian sense, is beside the point. Human beings will die for a good cause, and we help and heal the weak so that they can survive.

The cloud of causes that determine your own goodness is a confusing thing, and I sympathize with those who search for moral laws and principles, just as I fear what lengths the same people will go to in order to impose those laws and principles on others—historically, it hasn’t been a pretty sight. The bottom line is that we are a unique species in that our existence as humans is based on consciousness. Not only is morality mind-made, but so is everything about the reality we inhabit. Without the capacity to know, perceive, interpret, create models, make free choices, and self-reflect, we are nothing.

Even though it is painfully difficult to see beyond human perversity, violence, and self-destruction, they aren’t the ultimate foundation of human life. Consciousness is. To the extent that we can sort out what is good and true in ourselves, we live up to the moral impulses that we value. It’s also human to fall short and to devolve into cruelty and violence. But a fixed set of moral laws and principles carved into a new set of tablets from the mountaintop isn’t the answer.

More posts from author
Monday, 20 January 2020 10 Ways to Resolve All Conflicts and End War
Monday, 13 January 2020 Finding the Universe in a Coffee Cup
Monday, 06 January 2020 Einstein, the Moon, and You