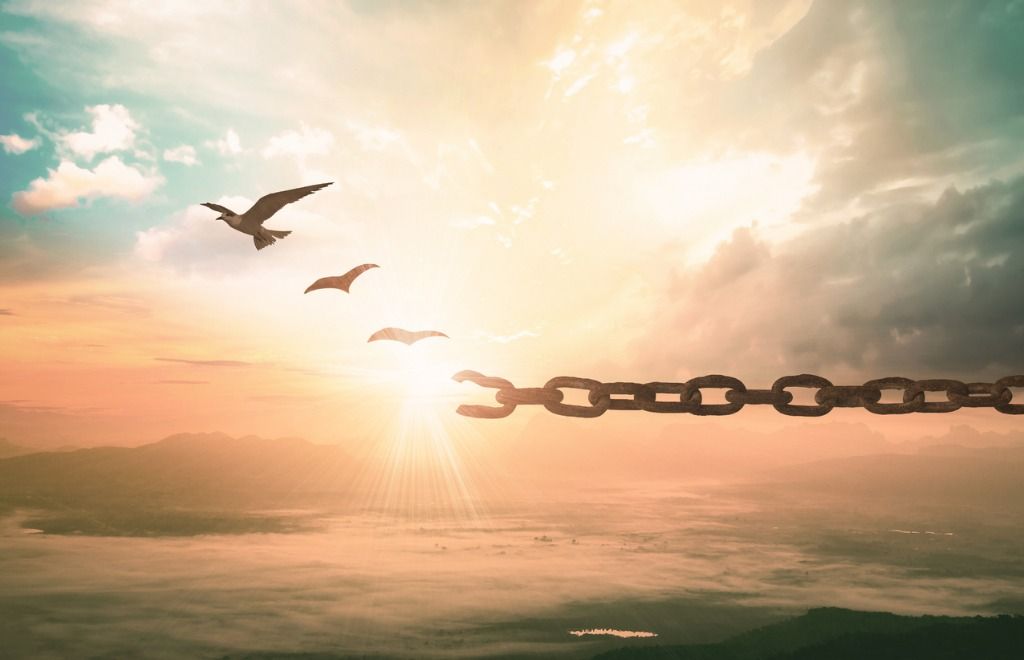 Have you ever severed a relationship, but even though the person was no longer in your life, you still continued the relationship in your head? Consider that the very act of keeping it alive even if only in your mind means you are still in it. Perhaps that happens when you feel a relationship is unrequited, and you’re not letting go, or you’re nursing a resentment because you won’t, or lack the self-awareness to see your part in the dynamic.

This is not about self-blame at all. It’s about self-accountability and freedom.

If someone is living rent-free in your head chances are you’re in a relationship that is still very active and alive for you because there is no closure and you’re the one keeping it alive. It’s almost never about the other person, by the time it’s “ended,” (you might have realized it wasn’t good for you) or “aborted” (because perhaps the other person didn’t return your love, etc.). There can be so many scenarios here if you think about it, but why does this happen? Why do we keep talking to the person we want nothing to do within our head? Why do we keep talking in our heads, trying to convince the person who doesn’t want us that we are the one for them?

It’s about how conditioned trauma still lives inside you, and likely has nothing to do with the actual person but what pattern got triggered. The original wounding is what is active, something that happened in the past unrelated to this experience, and keeping the internal relationship going is really about trying to fix the first wound that this one reminds you of.

Of course, that doesn’t work.

No amount of rumination and inner conversations and fantasy arguments will ever make you feel better or release you from how you identify with the core of the issue that eludes you. If you’ve ever had that kind of “put up your dukes, you hurt me and now you’re gonna pay” conversation in your head with somebody who isn’t there; you know what I mean.

It feels like you might have some power in the moment, but then it feels awful because nothing really gets solved and all you did was waste some precious energy on hopping on a train to the Ghostlands where nothing has substance, and you end up losing yours too. It’s even worse when you try to manipulate other people (you may be completely unconscious of this by the way) to join you in your victim story. But, truth is, it’s not hard to rally a mob. Lots of people are attracted to drama especially online.

The internet can also be a source to keep your toxic relationships alive. In the weirdest way, it mirrors the “ talking in your head” scenario as the cyber wall gives people the sense they can be anything and say anything they want and find themselves grasping to be heard in the most unhealthy ways. Of course, it can also be used for much good but that’s not the subject for this blog.

I heard a great interview with Billy Corgan – frontman for the band Smashing Pumpkins who talked about digital outrage and its short lifespan. Like a new drug – you get high then bam the comedown feels like you just wallowed in a mudbath and can’t find a shower. Like moths to a flame, people can gather around – it’s weird how it’s become a form of entertainment- taking people down for sport. But at some point, the crowd will move away, and you will be left with your distorted story, and they are on to some other distraction.


Keep in mind how others can make you a part of their sticky mess. Don’t get caught up with emotional vampires. As Dr. Christiane Northrup reveals in her latest book Dodging Energy Vampires, the drama makers feel so good, and you end up exhausted, depleted, and confused.

I cringe at some of my own memories of whining my face off to my friends and inside my head about each guy that was supposed to be “The One” and each person who I put on a pedestal and who let me down because of my unmet expectations, projections, and low self-worth.

Thank goodness there was no internet back then for me to blather on about my woes, although I look back with some EEEK feelings when I think of how many phone calls I made to anyone who would listen. Thankfully I just hauled my butt to therapy, got sober, and began to work with Oracles to keep me from making the same mistakes over and over expecting a different result. I made lots of embarrassing phone call for amends when I got sober (now almost 33 years!)

I have been there, and still can get into that mindset, but thankfully I don’t stay there long at all because I have tools and a mature life to model it all and know that it’s my responsibility not to take the bait.

So isn’t it better to cut it off before you go down the toxic rabbit hole?

When I first went into therapy in my 20s, I had this amazing Jungian psychotherapist who used the Tarot as a way to show me my patterns. It’s probably why all the Oracle Cards I create have that deeper psychology woven into them. It really changed my life.

Over time, and in the 30 years I have worked full time in the intuitive arts and made it my commitment to educate myself as much as I could about how the mind works as well as the metaphysical aspects of the quantum world. I arrived at some simple techniques to unhook from a toxic relationship that didn’t necessarily include deep therapeutic dialogue.

If you’re reading this chances are you are already doing a lot of personal and spiritual growth work already, or you’re considering it. Why do I assume that? I’m not popular with the quick fix it, perfect life in a snap, wiggle your nose and get what you want audience. A good life to me means self-examination and awareness plus accountability, and this is what can help dreams become reality. It takes dedication and consistency to live well.

So if you get caught in the toxic relationship snare whether it be about a person, drama on the internet, an institution, etc. Here are some tips I know work.

Step One – Radical acceptance. Admit you cannot change the other person or situation by any means. Know that whatever is happening requires you to step back and ask these questions.:-
What does this remind me of?
How am I enabling it?
What is my part in it?
Am I now or “somewhen” else?

Step Two- Surrender the whole shebang to your Higher Power
You’re likely not doing the best job here so perhaps a power greater than you could restore you to sanity?
If you feel resistance to giving it up for healing can you commit to being willing to be willing?
What is your motive to keep it going?

Step Three- Do a cord cutting ceremony. Imagine you have energy strands moving between you and the other. Call on the archangel Michael to bring his sword to cut them. You will feel relief but only if you’re serious about detaching from it.

Step Four- Do an Oracle reading on it once you’ve had some distance. But if you want to do the reading right away make sure you meditate first and get into a neutral state. I teach this technique in Oracle School and it’s incredibly effective. Then stay in 24 hours and when those red flags start flapping that a situation reminds you of something still unprocessed within you. Stop. Take a Breath. Ask is this truly about now or something else?

I think of a reading a couple of years ago with a friend who called me in a semi-freaked out state about her boss at work (telling this with her permission). She had trouble with this man before and had mentioned the relationship reminded her of her toxic relationship with the first person who ever betrayed her and abused her.

She admitted she was always trying to get his attention all the time and desperate for his approval and flirted with him constantly. The truth was the dynamic she was engaged in was really unhealthy for both of them. He did not give her a raise which she thought she was entitled to and so she went off the rails. He did say he was sorry and that he would reassess things in 6 months.
From my side of things, it was nowhere near dramatic as she projected, but in her mind this was Armageddon!
So I said let’s pull some cards. You really can’t make this up- I picked All that Glitters, Not For You, and Time To Go from Wisdom of the Oracle.


IN a nutshell – the message was to move beyond the superficial and look deeper at what was really going on, that this situation was being withheld from her because it was not for her, and it was time to move on. To add extra wisdom from another deck, we chose The Enchanted Map and got Ghostlands.
She mentioned at the end she was headhunted by another company but because she was so outraged by what “he did” she didn’t pay much attention. O boy, isn’t it amazing how we might miss opportunities because we’re banging on old doors that aren’t meant to open?

Being her friend I asked her the questions above, and having good boundaries I stayed detached and refused to get into the “he said she said.” I told her to consider she was not dealing with the “now” but stuck in the Ghostlands of that first relationship.
She had an epiphany right there and then!A month later my friend had taken the other job and totally got the cards were telling her this was about her choice and behavior too, and that she can not heal the first one through forcing someone else to be the surrogate.I saw her for coffee a couple weeks ago and we actually laughed about what she had thought was so traumatizing. But this woman is committed to personal growth and freedom and her self-awareness is what allowed this to be her new perspective.

So when you find yourself in a toxic relationship, however you choose to disconnect from it know that the ones you keep perpetuating are not that difficult to clear.
It comes down to how healthy and free you really want to be and feel.
Believe it or not, it takes real courage to choose that.

Love to hear from you about how you woke up from a toxic situation and found your way out of it.

4 Things Holding You Back From Greatness

9 Ways to Unleash Your Joy (Even During Turbulent Times)

Can We Ever Heal From Childhood Abuse?