The Unlikely Fate of Two Universes 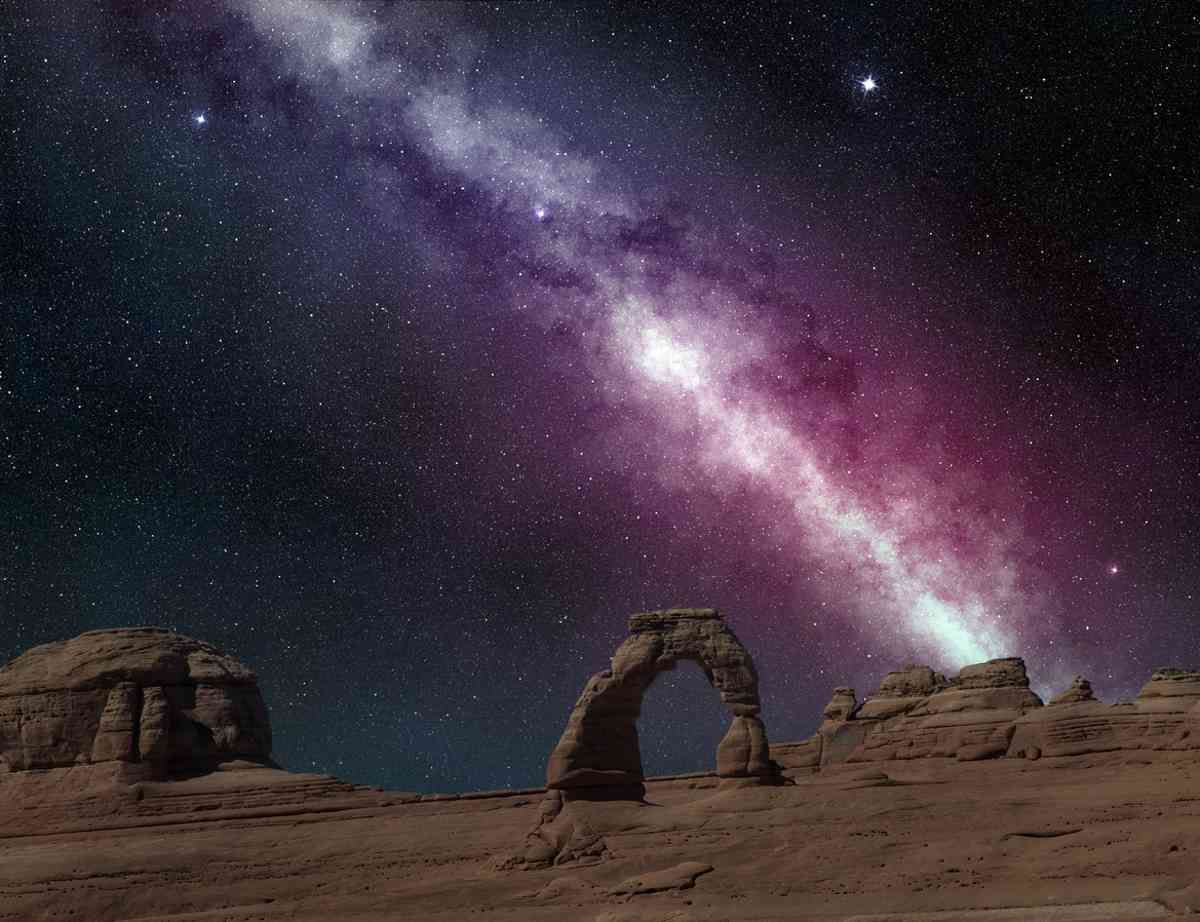 By now most people have heard that a Theory of Everything is within reach in the near future, meaning a unified explanation of the physical forces in the universe. Yet "the near future" has stretched out for several decades. This apparent overconfidence and undue optimism points to some serious and as yet unexplained oddities and paradoxes afflicting the flagship theories of science, which are unable, in stark contrast to the prevailing confidence of the past, to explain the vast majority (96%) of the universe. The presence of dark matter and energy, for example, has caused some expected calculations in quantum mechanics to be off by a staggering 120 orders of magnitude.

The average person would see no relationship between an intellectual difficulty facing modern physics and everyday life. We are all used to experiencing the sensual world where a geranium leaf is soft, fuzzy, green, and aromatic. In the scientific world the same leaf is quantified into objective facts like the molecular structure of chlorophyll and the nature of photosynthesis. What almost no one realizes is that these two views of the natural world actually represent two universes. A single geranium leaf is like a fork in the road. One way leads to the richness of the world as we experience it every day. The other road leads to the universe of gravity, relativity, and quantum activity.

To the chagrin of physics, the universe they have so precisely calculated may depend upon the common-or-garden universe of everyday experience to survive. Here's why. The root cause for the lack of a Theory of Everything is ignorance of the physics of spontaneous mass-energy conversion. Einstein discovered the mathematics that allows matter to convert to energy in his famous equation E=mc2, and the result that most people are aware of is the atom bomb, where tiny amounts of matter (uranium) are converted into enormous amounts of energy.

Yet at the smallest level of nature, mass and energy are spontaneously converting into each other, as when particles decay. The most basic conversion concerns the fact that every elementary particle like an electron or photon has a dual nature, existing either as a wave or a particle. But when a photon in a light bulb is released by an electron, it immediately travels at the speed of light without any real explanation. On a vast scale, the big bang represents a titanic conversion of mass-energy again without a viable explanation. Current theories about the multiverse, in which ours is only one of trillions of possible universes, doesn't really help, because the alternative universes cannot be reached, observed, or measured.

We seem to have wandered farther from everyday life rather than closer, but if you consider the second universe, the one we all live in matter of factly, it too has a huge unsolved problem. How does the brain produce the sights, sounds, and other properties of the visible world? Neuroscience assumes that the mind is a byproduct of the brain but there is zero explanation of how tiny electrical firings and chemical reactions in a nerve cell suddenly blossom into the whole three-dimensional world. What if there is a common missing link between this problem usually referred to as the "hard problem" of connecting mind and brain and the problem facing physics?

One of the authors of this post, Dr. Singh, proposes that there is in fact an integrated model that provides a direct relationship between the physics concepts of space, time, mass, and energy, and the concepts associated with consciousness, in particular spontaneity and free will. A new thought occurs just as spontaneously as a new particle or wave, and equally mysteriously. The laws of physics and chemistry ruling the brain are fixed but the intentional choice input of the observer determines the outcome. This spontaneity of the observer’s consciousness negates the repetition of fixed, predetermined mental activity, leading to the storm of freely arising feelings, thoughts, images, and sensations that constitute mental life. The universe of everyday experience derives from such spontaneous conscious events, and just as equally, the fixed laws that govern the scientific universe are easily, howsoever not so intuitively, correlatable with the spontaneous conversion of mass into energy.

Dr. Singh's unique answer to all the paradoxes of physics and consciousness is what he calls the Universal Relativity Model (URM). Deepak became fascinated because his recent book, You Are the Universe, co-authored with physicist Menas Kafatos, posited exactly what URM delivers: a single reality that doesn't need two universes, one for science and one for everyday life. Singh's breakthrough was to take Einstein's E=mc2, which applied relativity to matter, energy, space, and time in a very general way, and go a step further, applying it to everything in the universe, including human consciousness.

At first blush this seems all but infeasible, because, as we saw, a green leaf looks, feels, and appears in every way different from the formulas of biology, chemistry, and physics. But the distance between any subjective experiences--the heat of a summer day, the sound of rain on the roof, the scent of a rose--has been impossible to bridge to the world of objective data, measurements, and experiments? How many meters wide is love? What does a laugh weigh? To construct this bridge is actually possible only if we wake up to the fact that Nature is doing it already without playing any dice.

And that's what is happening. Nature is so precisely organized that it coordinates every dimension and force from zero to infinity as part of the implicate cosmic order. Take a snapshot of a single moment in time, such as the moment the first primitive life form like blue-green algae or a single-celled amoeba appeared. This was more than a moment (the dimension of time). There also had to be the exact portion of space (planet Earth), mass (all the chemicals involved in living forms), and energy (the proper temperature range for living things). The coordination of these factors was in fact unique for this moment. Pick another moment--when the first dinosaur appears, a specific supernova exploded, or your first birthday--and the "recipe" of time, space, matter, and energy was just as unique. The universe entails life and nature as one wholesome continuum of conscious experiences or awareness.

Since all of these factors are flexible and expandable, they are in a relativistic relationship with one another. This is all logical and easy to grasp, although the necessary math is complex. What emerges is universal relativity, an infinite continuum of unique "recipes" for anything you can name in the cosmos. Along this infinite continuum, every option is open to human awareness. There can be time close to zero or expanded to eons, space smaller than the infant universe when it was billions of times smaller than the period at the end of this sentence or expanded to billions of lightyears, and so on.

If everything exists on the same continuum of universal relativity, there are no more paradoxes, contradictions theoretical bumps, and discontinuities. This model does something that even the standard Theory of Everything would not be able to do even if it was finally formulated. It includes the second universe of conscious experience. Two totally opposed conceptions of reality - the objective scientific worldview and the inner world of the mind, are bridged while remaining within the demand for data, measurements, and hard evidence.

In our next post we will cover the immense implications of URM for how reality actually works. As a preview, below is a brief description of how URM resolves the current paradoxes of physics and cosmology (using somewhat more technical language than in the previous paragraphs):

URM eliminates the need for a single creative event like the big bang, because genesis is a constant: there is continuous unlimited mass-to-energy conversion all the way to the most infinitesimal sizes of the universe.

What came before the big bang? URM predicts an eternal quasi-static universe without time being a parameter. Hence, nothing came before (or after) since there was NO big bang.

Where did time come from? URM predicts the observed universe without time as a parameter. Relativistic time appears as a property of gravity-dominated states of matter. There is no unique universal time as such.

What is the universe made of? URM describes the universe as an infinite number of relativistic states of mass-energy-space-time varying with each circumstance. The net mass-energy of the universe is conserved and remains constant in all states.

Is there design in the universe? The unchanging relativistic laws of the conservation of mass-energy-space-time and various universal constants govern cosmic behavior. There is no need for either a designer or design.

Is the quantum world linked to everyday life? Yes. URM describes the whole universe as a continuum from infinitesimally small to infinitely large scales. There no duality--no split-screen for physics to worry about, once every level of Nature is interwoven seamlessly.

We will skip the other more technical paradoxes that URM addresses in order to jump to its most revolutionary implication. Do we live in a conscious universe? Yes, for the simplest of reasons. In an eternal universe where change is totally relativistic, creation is eternal also; therefore, so is life. The form that life takes--an amoeba, algae, dinosaur, Homo sapiens--is really a snapshot isolated from the reality of eternal life as it spontaneously "bubbles" up with new forms.

Because the prospect of eternal life is so full of meaning, we will discuss this aspect of URM next time. For the moment, the possibility of the two universes having the same fate as aspects of one reality is quite thrilling in its own right.

Avtar Singh, PhD, is author of the book - “The Hidden Factor: An Approach for Resolving Paradoxes of Science, Cosmology and Universal Reality”. He has Doctor of Science and Master of Science degrees in mechanical engineering from Massachusetts Institute of Technology USA. As a member of American Nuclear Society and American Society of Mechanical Engineers, he has been involved in state-of-the-art research and development in science/engineering over the past 30 years. He has published more than fifty papers in professional journals and two monographs. He received the ‘Best Paper Award’ from the American Nuclear Society, MIT Fellowship, national scholarship awards, and several industry technical excellence awards.

What Role Does Science Play In Our Lives?

The Brain Needs Reinventing—Here’s How

How AI Could Set Us Free