The Eagle And Condor Prophecy And The Virus 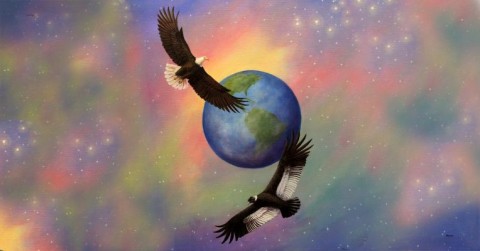 The Eagle And Condor Prophecy And The Virus

The Prophecy of the Eagle and Condor probably began more than two thousand years ago. It says: “Back in the mists of history, human societies took two routes. The Eagle peoples flew the path of the mind, of science, technology, and industry. The Condor peoples flew the path of the heart, of passion, intuition, and spiritual connections with nature.” It goes on to explain that for centuries they would never meet. Then in the Fourth Pachacuti (in Quichua, the language of the Andes, a five hundred– year interval), which began in about 1500 AD on our calendar, their paths would cross; the Eagle would nearly drive the Condor into extinction. But not quite. The prophecy says that five hundred years later, at the beginning of the Fifth Pachacuti—now—the opportunity arises for the Eagle and the Condor to fly together, to mate, and to produce a new offspring, higher consciousness

History confirms the first prophecy. Columbus, 1492. The Eagle swept into Condor territory and almost wiped out the Indigenous peoples. But not quite.

Now, five hundred years later the prophecy is being fulfilled again. The Eagle and Condor are coming together to create higher consciousness. It is happening! Indigenous teachers have invited us to learn their ways. There is a deep interest in traditional nature-based wisdom and shamanism among industrialized people around the world.