We’re back in the kitchen! American eating habits are changing. 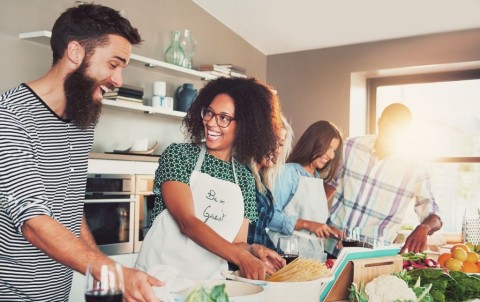 We’re back in the kitchen! American eating habits are changing.

Referencing the old saying, Everything old is new again—all of a sudden, cooking at home is trendy! A recent article in Bloomberg Business with data about current eating habits says,

“Home cooking would be making a comeback if it ever really went away. Restaurants are getting dinged by the convenience of Netflix, the advent of pre-made meals, the spread of online grocery delivery, plus crushing student debt and a focus on healthy eating. Eighty-two percent of American meals are prepared at home [emphasis mine]-- more than were cooked 10 years ago, according to researcher NPD Group Inc. The latest peak in restaurant-going was in 2000, when the average American dined out 216 times a year.” Read the full story.

Way back in the day, you just didn’t have a choice! You grew and cooked your food or you starved, with none of the distractions or choices that people have today. Being in the kitchen, cooking and feeding a family was a necessity. Things started shifting after World War II when convenience features and choices like frozen TV dinners manifested. Now we’re eating IN by choice, because it’s more economical and because we’re more concerned about our health and well-being.