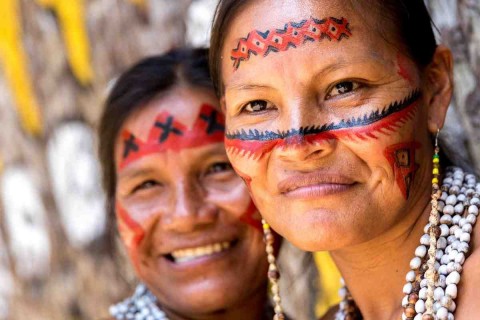 Many years ago, back in the early 70’s, I had a Buick limousine that I had made over into a camper.

I opened the trunk up, and I lived there, and I was driving across the country. I started out from Boston and I had been in India. I had developed certain practices that I just loved doing and at the time I loved doing mantra, or just saying the names of the Beloved over and over again, “Ala, Yahweh, Krishna, Ram.” I would just take the names and keep repeating it, and I sometimes sit with beads and I could go into these extraordinary states of deliciousness.

I was driving across the country, and I wasn’t listening to the radio, and the car is big. It was like a tank, and it just went slowly. I had one leg tucked under me, and I was just driving along in New York, doing my “Hari Krishna, Hari Krishna, Krishna, Krishna,” just keeping enough consciousness to keep steering the wheel. I was doing this when I became aware of a flashing blue light, which might have been the blue light of Krishna, but it looked like a state trooper, so I pulled over and I stopped, and this being got out. He came up to the window and he said, “May I see your license and registration?” Turned out I was going too slow.