Kogi Support Offered Through The “Land For The Kogi” Initiative 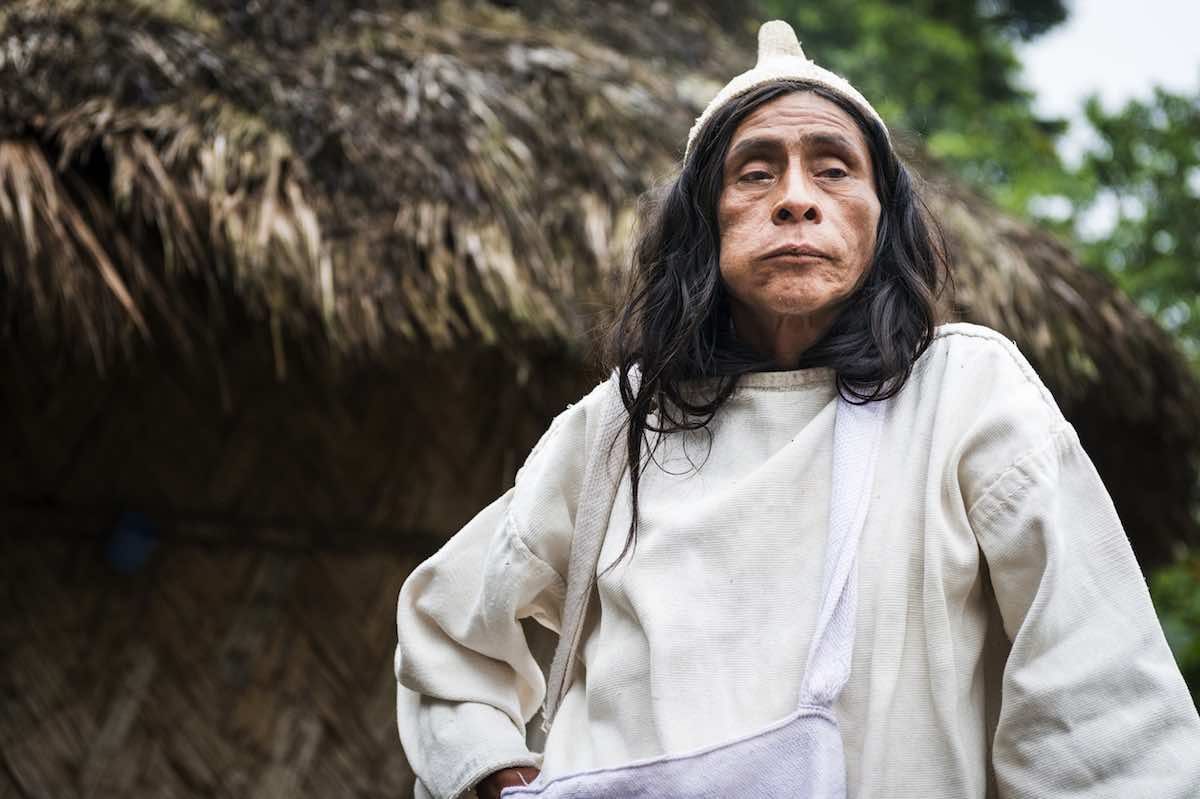 The participants in the December 2016 Colombian Journey, led by Daniel Koupermann and John Perkins, collectively raised $9515 USD to support the Kogi indigenous people. The primary goal for these funds was to purchase land for the community of Tayku.

I (Farrah) was the only representative from our group able to return to Colombia to oversee the distribution of our funds and participate in the pilgrimage with the Kogi. Daniel arranged the logistics for the pilgrimage, caring for all the details of transportation, accommodations and meals. Our friend and local guide Jaruen also played an important role, coordinating directly with the Kogi to prepare the paperwork and make arrangements for gathering the Kogis for the pilgrimage.

On December 13, 2017 the four joint owners of the land and a representative of the Kogi community, Juan, met at the notary office in Santa Marta, Colombia to transfer the deed of ownership to the Kogis. Daniel, Jaruen and I were also there.

Two plots of land were purchased using the money raised by the 2016 group. One plot will be used primarily for agriculture. The second plot of land sits at the base of a hill that is sacred to the Kogi community. The Kogis will use this land to gather materials to build a ceremonial structure on the hill, and also as a buffer so that no other construction can compromise this sacred area.

Our funds enabled the Kogi to acquire 19.77 acres of land in total (8 hectares). 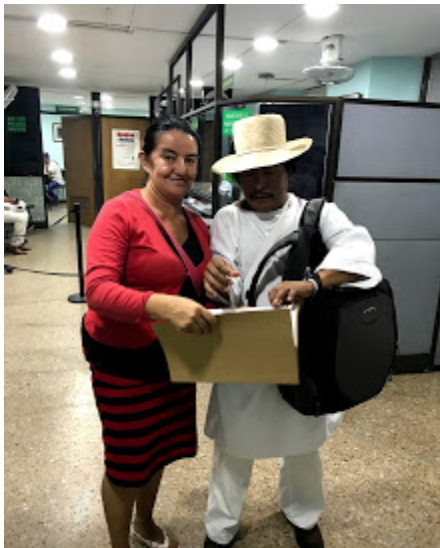 According to tradition, it is important for every Kogi Mamo—trained spiritual leader—to do ceremonies at particular sacred sites a certain number of times in their lives. Unfortunately, in these modern times, it has become very difficult for the Mamos to fulfill this obligation. 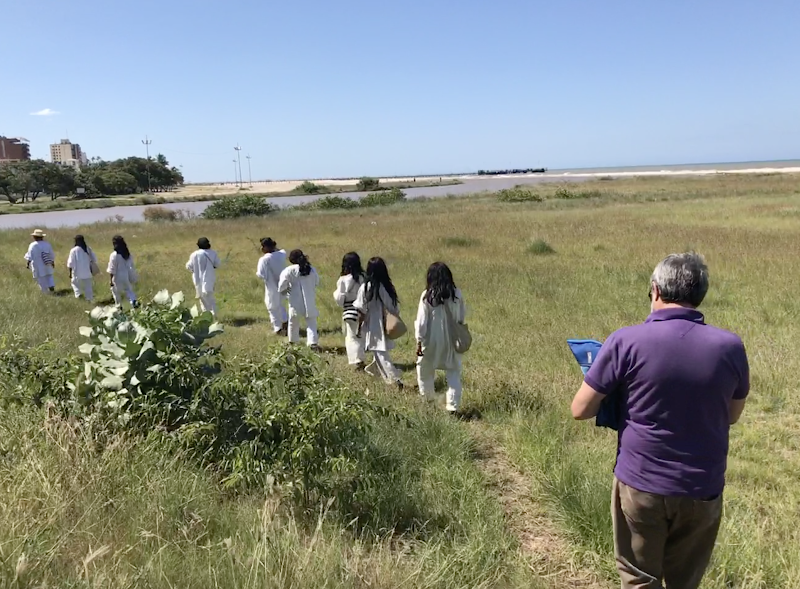 The Kogis expressed that they would like to enable the Mamos of several communities to visit these sacred sites. With our financial support, ten Mamos were able to embark on this pilgrimage. The Mamos were of various ages, from late 20’s to 60’s.

The first sacred site was on the northern coast of Colombia in the city of Riohacha. We parked the cars and crossed the street to walk towards the mouth of a river. To reach it, we walked through a homeless camp with trash strewn all over the ground. We gathered together under a bridge to do the first Pagamento (payment). It seemed an ironic place to begin this pilgrimage to sacred sites, and yet it was rich with meaning. For me, it was a reminder that sacredness is all around us, even in the most unlikely places, and that the beauty of this earth always remains, despite the degradation imposed by modern society. 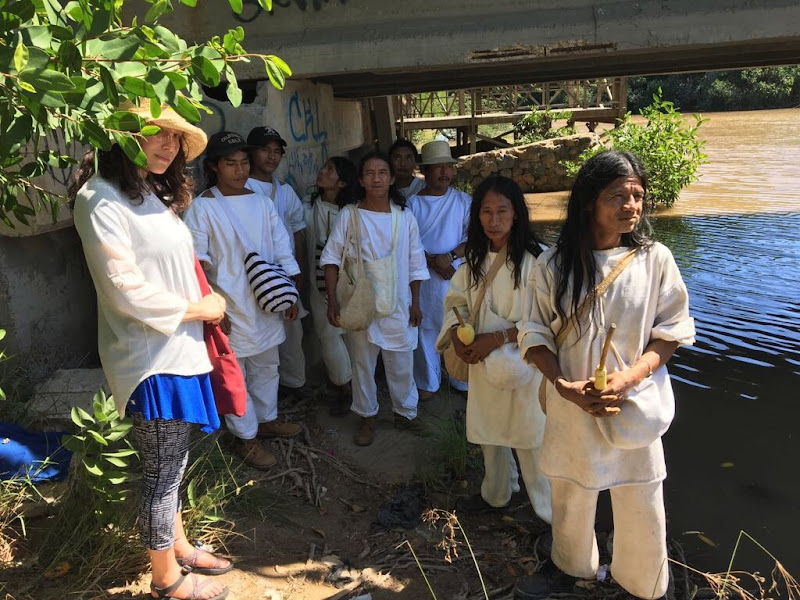 Mamo Manuel (maybe some of you remember him from our visit to Tayku?) passed out small, woven cotton pouches to each person. Inside the pouch were several balls of cotton. Holding the pouch in our right hand, we put our thoughts and intentions into it. After a few minutes, we removed half of the cotton and passed both the pouch and the cotton back to Manuel. He then released the cotton into the river, completing the transfer of material from the mountains to the sea, as well as the release of our thoughts. To close the ceremony, we spun in a complete circle first to the left, and then to the right. 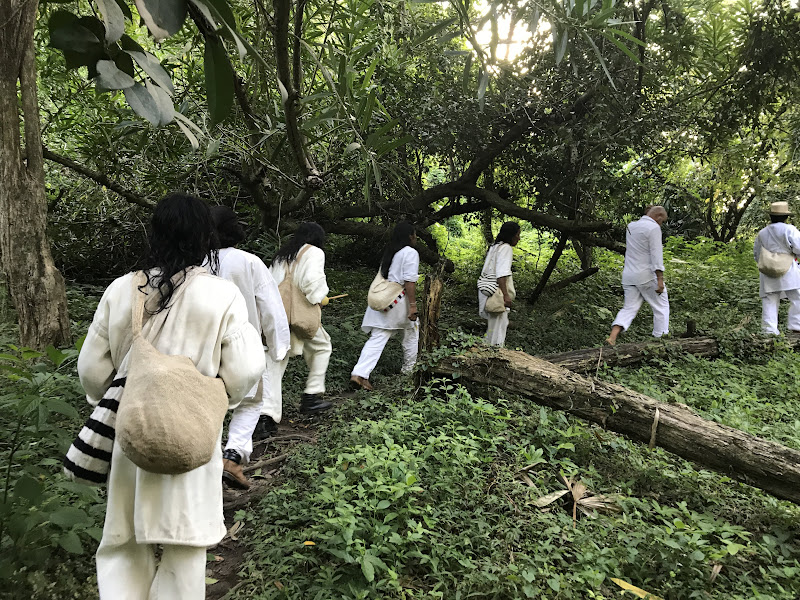 This Pagamento ceremony was repeated at each of the nine sites we visited together. Despite its simplicity, the Pagamento, or Payment, is a powerful transfer of energy, intention and appreciation. Through the ceremony we acknowledge our gratitude for the earth and all she provides for us, offering a reciprocal payment in the form of our focused thought and the material released at the site.

Subsequent sacred sites included the mouth of the river at Dibulla, large “Guardian” rocks on the beach in Tayrona, the stone of Duanama (or creation stone), Bahia Gayraca, the mouth of the Gaira River, and the hot springs at Volcan.

At the Gaira River, the Kogis looked in silence at the several cranes and machinery above us on the hill. A large building was actively being constructed, despite the Kogis having won an order in court to halt the construction. It is being built directly on what they call “Father Lightning” or Jate Matuna. The Kogis are deeply concerned that the disrespect with which the builders are treating nature will ultimately harm the site and that it is not safe. So far, the builders are not heeding the warning. 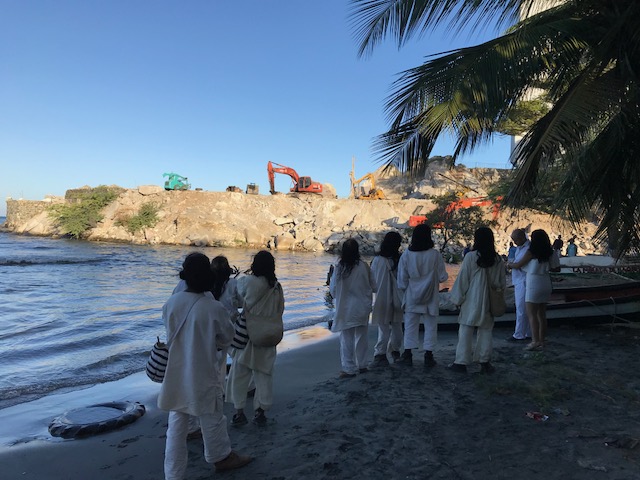 The Kogis are deeply committed to continue to honor the earth and all its inhabitants. They live lightly and make offerings to help heal her of the damage being inflicted. The Kogis carry their message to us, the Younger Brothers, through their actions, their example and their relationship to nature.

READ THE FULL ARTICLE HERE TO LEARN HOW THE REST OF THE FUNDS HELPED THE KOGI....