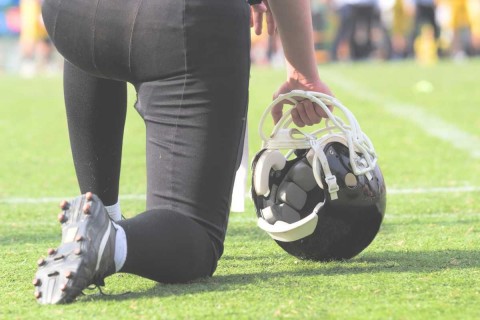 "America is an idea. America is the greatest idea that the world ever came up with." — Bono


I just love that quote from Bono because it's so true. America is definitely the greatest idea that the world has ever come up with.

America was founded upon an idea. We were also founded by people who took a stand. That's our heritage, and it’s part of what makes the idea of this nation so great.

There have been people taking stands everywhere—from Capitol Hill, to sports fields, to TV screens (thank you, Jimmy Kimmel, for using your platform to take a stand on health care).

I've been asked countless times, “What's going on? Why is this happening? What would you do?” I’ve been thinking about it all week, and I don’t have all of the answers, but here is what I know for sure: I am proud to be an American. I respect our flag and those who fought for our great country. I also believe that when it comes to race relations, we can and must do better.

I understand why so many athletes took a knee. Personally, I preferred the way the Dallas Cowboys’ managed the situation—by locking arms, kneeling, and then standing for the “National Anthem.” To me, that was an acknowledgment of what is, as well as a sign of respect for who we are as a country. I also appreciated how the Green Bay Packers and Chicago Bears handled it Thursday night—by locking arms and then encouraging fans of both teams to do the same. It's an example of inclusivity that's worth recognizing.

Personally, I don't believe that people who take a knee don't love their country. I think you can both love your country and take a knee to acknowledge what is, while committing to doing better.