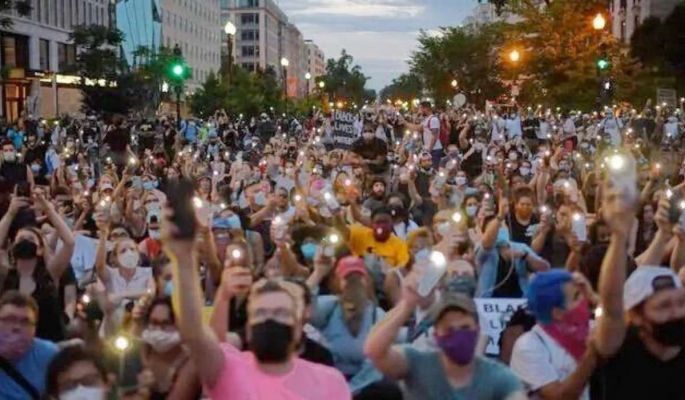 “To bring about change, you must not be afraid to take the first step. We will fail when we fail to try." – Rosa Parks

It was just a few short weeks ago that I wrote that I didn’t think we were going back to “normal.

At the time, it had dawned on me that the pandemic had uprooted us in ways big and small and that those yearning to go back to the way things used to be were in for a surprise. I had no idea how uprooted we were about to get.

This past week, millions watched as America’s streets and cities erupted across the nation. Huge peaceful protests called for an end to police brutality and for overdue systemic change. For a moment, the message seemed to get drowned out by images of violence and looting, which left people deeply shocked and shaken. Elected officials called in the National Guard and imposed mandatory curfews. Meanwhile, citizens in these cities stepped in to clean up the mess. More importantly, though, citizens stepped up to show us the opportunity and the importance of this historic moment.

Like many, I spent the week trying to listen and uncover my own blind spots. I tried to better understand and hold space for the grief, anger, hurt, and despair that came tumbling out in so many of my conversations. As always, I learned a lot from listening. I learned a lot from engaging in deep, meaningful, and often uncomfortable conversations. I came out on the other side inspired by those who were brave enough to share their pain and bold enough to stand up and lead.

The truth as I see it is this: This is a moment for each of us to lead in thoughts, words, and deeds. I know people are scared for all kinds of reasons. They’re scared to speak up, scared to say the wrong thing, scared that they will be attacked if they do make a mistake. But everyone needs to push through their fear and try.

When people go years—generations—without being heard, they erupt. Think about that in your own life. Think about how you have felt when you haven’t been heard or when you have felt invisible. When every time you have tried to speak your truth, you have been told either it isn’t so or “this isn’t the right place or the right time.” Or maybe you were told just to keep quiet. That feeling of not being heard is exhausting. It’s enraging. It’s too much.

As the week came to a close, many images and thoughts stuck in my mind and stayed in my heart. My friend Devon Franklin urged us all not to be afraid and instead to seek to be the “leader of one.“ He also said to try and make your table as diverse as possible, or to at least engage in diversity of thought and conversation.

I spoke with Dr. Cozzette Lyons-Jones, who works in Watts fighting health disparities that are part of the fight against racism. I also spoke to Sybrina Fulton, Trayvon Martin’s mom, and was inspired by her invitation to all of us—regardless of the color of our skin—to join in the fight for justice. She said that no mother should have to hold her breath every day when her son walks out the door, wondering whether he will return home.

My friend Simon also said something interesting to me. He said that in his work with police officers and in his conversations with African-American friends, both groups told him independently that their idea of a “good day" was one in which they both came home alive. Let that sink in. A good day is one in which you come home alive!

Now imagine yourself in that place. We all have that desire for ourselves, our friends, and our family members. We want them to be able to walk out the door and come home alive.

I grew up in a family where people walked out the door and didn’t come home alive, so in some small way, I can connect with Sybrina (and we all need to find ways to connect). Every time the phone rings in my house late at night, my first thought always goes to that fear. It’s leftover trauma. Trauma stays in your body forever and it lasts for generations.

Look, no one wants looting. They want justice. They want police reform. They want validation. They want love and order. Sometimes the love I dispense in my own home is uncomfortable. I have rules. I want respect. I want to be heard. I don’t want to be told that what I’m experiencing isn’t so. I don’t want someone to tell me to calm down or to be quiet. And what I want, I try to give in return.

President Obama said this week that this is a moment, an opportunity. His words reassured me and gave me hope. He spoke to those in law enforcement and to those protesting. He spoke to local officials and those wondering what to do or say.

What Do You Do When You Have A Broken Heart?

What Are You Afraid to Feel?