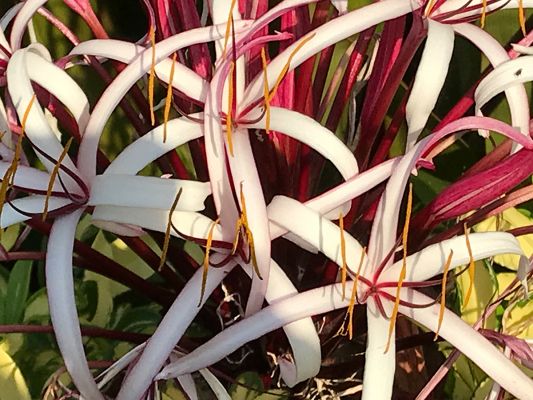 It’s hard to look unflinchingly at the full extent of racism in the U.S.; it’s ugly, brutal, inhuman. The knee on the neck that chokes the breath out of a living person, the lynching rope that has choked the life out of generations of African Americans. White people have looked away, not wanting to see that cold-blooded brutality or the systemic racism built into American institutions created by white men and slave-owners. Black people don’t have that choice, that privilege; they face racist reality full-force every second of their lives. Parents have to instruct their children how to behave when they encounter a police officer (“hands up”). The adults carry fear in their hearts just living an ordinary life because they know they could be killed no matter what they do or don’t do (George Floyd, Breonna Taylor). Black lives have never mattered in the history of this country; the inability or refusal to see that is white privilege. This is the harsh reality of racism in America.

The other day, a friend of mine, a lifelong activist, asked me how one can be a supportive loving presence at protests in solidarity with angry participants, both black and white. Where does love figure in unity and demanding justice? Can love and anger coexist? Difficult questions. If we believe in the power of love, how do we live it, especially now? The first thought that occurred to me was to listen (which is an act of love), to pay attention to the voices of African Americans who are speaking the truths of their lives.* Voices that have been suppressed and silenced for hundreds of years. Outrage at injustice and murder is part of those truths. White people have to remain open to hearing that anger without filtering or deflecting it.

I am a white lesbian; I know sexual discrimination and homophobic hatred from the inside of my life experience. But I do not know racism from the inside. No white person does; that too is white privilege. We have to listen, and we have to look inside ourselves for the racism we carry within, the preconceptions and privileges. This is the hard uncomfortable look. It’s not up to black people to instruct white people about racism; it’s up to white people to learn by listening, to be willing to have uncomfortable conversations, and then to act in order to be the change. Can we do this with love and compassion in our hearts? I believe we can.

It’s a practice. It’s coming back to the perspective that together as a people, we are all mothers and fathers, sisters and brothers, children and parents, single and married, young and old, black and white, gay, straight, and trans. Yet, within that, there are actions we need to take as individuals and collectively to change a system that was built on inequality and exclusion of people of color. It’s not a broken system; it works perfectly to support those in power and keep others from knowing their own power. It’s time to recognize that much of the story of American freedom and democracy is a myth that excludes a large part of the population. It’s time to create something new, out of outrage and out of love. Both can live side by side, if we are willing to truly listen to each other and work together.

The hard look for white people often involves discomfort, defensiveness, guilt, and fear of saying the wrong thing, of being thought insensitive and racist. But if we face the fact that we, as white people, are racist, shaped by a racist power structure (from which we have benefited just because of the color of our skin), then we have a place to begin. There is embarrassment and vulnerability in acknowledging that truth, but perhaps that is the opening we need. To be willing to say the “wrong thing,” to learn from our mistakes, from what we don’t know but can learn. Out of open conversation comes the opportunity for transformation in a world that desperately needs it. The global and national crises of COVID-19 and George Floyd’s murder have placed this country, and the world, at an historical tipping point. It’s up to us to redream humanity’s future, from division into unity, from separation into oneness, from fear into love. It’s time…
————————
*Listen to the deeply honest participants in Oprah’s two-part program Where Do We Go From Here?: https://www.youtube.com/watch?v=09ysfL2SlHo

Are You Willing to Choose Love Right Now?

The Power of Asking For Help