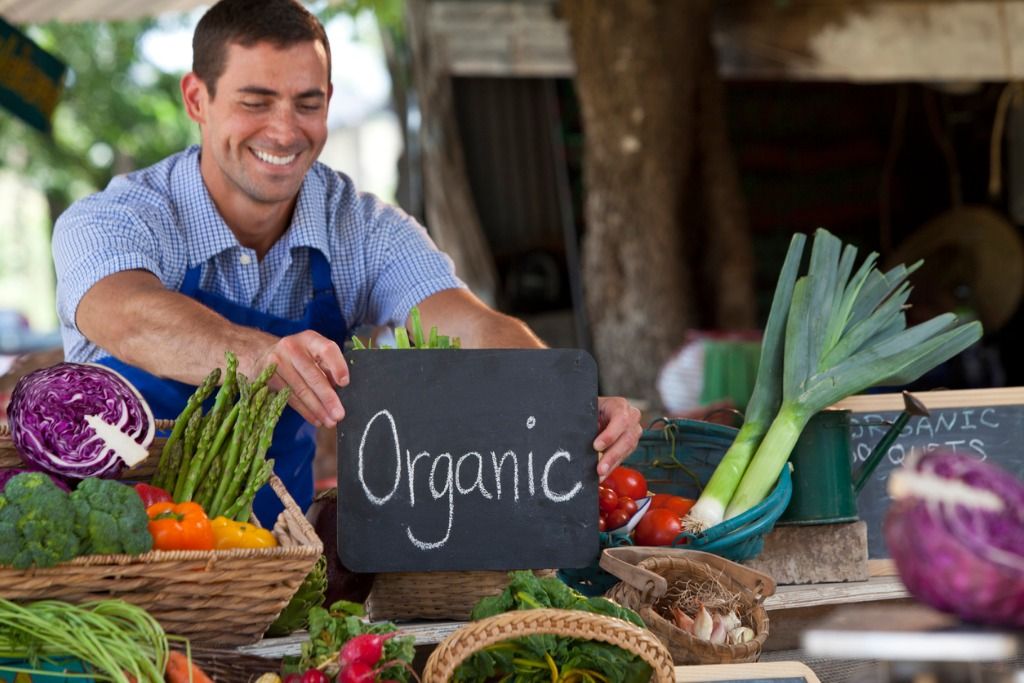 A 2018 study examined the link between organic food and cancer. And it came to some remarkable conclusions. Researchers found that eating organic foods can help cut overall cancer risk due to the reduced exposure to dietary pesticides.

More than 1.7 million Americans will be newly diagnosed with cancer in 2018, and 35% of these cases will prove fatal.

Imagine the excitement that would accompany the discovery of anything — a new drug, therapy, diet, or lifestyle change — that promises to cut overall cancer frequency by 5%.

Every year, such a discovery would spare 87,000 people this most-feared diagnosis and reduce deaths by 30,000 and cancer-related health care costs by around $7 billion.

Organic Food Cuts Cancer Risk, According to a Study Sizable reductions in prevalence were also seen for breast cancer, non-Hodgkin lymphoma (NHL), and all lymphomas.

If you’re interested, check out a written summary of the study methods or watch this 2-minute video focused on key findings:

The French scientists suspect that the reduction in pesticide dietary exposure among study participants reporting a high-level of organic food intake is the key factor driving these encouraging results. The team did all it could to control for several confounding factors.

They stressed the study’s limits and the clear need for more precise measures of pesticide dietary exposures. They emphasized the need for all consumers to eat more fruits and vegetables, conventional and/or organic.

What About the Shortcomings of This Study?

True believers in organic food and farming systems see proof and vindication in this paper, while defenders of the pesticide-status quo are generally dismissing it, citing one or more weaknesses from a long list of widely acknowledged shortcomings in this sort of study.

Does the study prove organic food will reduce cancer rates by 25%? No, of course not.Epidemiology studies cannot prove cause and effect. Could the study have been improved? Yes, of course, as can any study.

But for people wondering whether to take this study’s encouraging results seriously, the question that really matters is: Did the weaknesses of the study likely inflate the health benefits of organic food?

Yes, multiple studies report that people do not always accurately recall, or report, what they actually ate. But deviations from actual intakes across the near-70,000 people in this study were likely comparable across all participants, regardless of how frequently they reported consuming a particular type of organic food.

So, were self-reported dietary intakes a source of inaccuracy — yes. Were they a source of major bias in results — not likely. There were three responses taken into account in calculating an aggregate “organic food score” for each study participant across each of the 16 food categories: (1) Two points when a participant reported buying organic brands “most of the time”, (2) One point when organic brands were “occasionally” consumed, and (3) no points for all other responses (“never” or “I don’t know”).

Recall that the reduction in the number of cancer cases over a four-year period post-enrollment in this study is based on comparing the quartile (i.e. 25% of participants) at the high-end of the distribution of organic food scores (i.e., the people who eat the most organic food), compared to the 25% that consumed essentially none.

A close look at the data by quartile suggests clearly that the “low-intake of organic” group reliably contained people eating essentially no organic food, while the high-intake group included all or nearly all of the people regularly consuming organic brands across at least a few categories of the 16 foods studied.

So, regardless of some degree of over- and under-reporting of organic food intake, the comparison of new cancer cases in the high versus low-intake group amounts to a comparison of people eating some, to a lot, versus no organic food.

Weakness #3: Failure to Fully Take into Account All Confounding Variables

There has never been, and will never be, an epidemiological study that meets this threshold. So, unless one is willing to dismiss the entire field of epidemiology and all insights gained from well-designed studies, dealing with confounding factors is part of the process. Major source of bias? Not likely.

The French team carried out a variety of sensitivity analyses, introducing several confounding factors into their model individually, and then in various combinations.

After adjusting as fully as possible for confounding factors, they reported their main result in the studied cohort of 70,000 French citizens — a 25% reduction in the risk of being diagnosed with a new case of cancer within four years after study enrollment in the high-organic food intake group, compared to the low (and essentially no) organic food intake group.

Might the percent reduction have changed if another four years of cancer incidence data had been available? Yes, it almost certainly would. Might the differences have narrowed if people were followed until death? Again, probably yes. Might it have widened? Maybe, but not likely, because 25% is a large share, and many other factors are known to trigger or accelerate cancer.

But are there solid reasons to expect the above weaknesses and limitations are largely responsible for the strong statistical results in this study (i.e., consistently triggered bias in one direction)? None that I know of, or have yet heard from this study’s already vocal critics.

Why This Study Is Beneficial

Suppose the French team had been provided unlimited funding and a magic wand and were able to overcome all of the above limitations and weaknesses. And upon rerunning their main model, the actual reduction in overall cancer rates in the high-organic food intake group fell to only 5%.

Just imagine the excitement that would accompany such a finding, until of course those who just don’t believe pesticides are hazardous, or that organic food is safer, start anew the predictable litany of criticisms, questions, and worse.

In closing, thanks to the 70,000 citizens who took the time to enter all the data requested by the research team. And thanks to the French team for a quality piece of work that had to take a great effort to carry out.

I hope you will continue your work in this area, with adequate funding and perhaps even a slightly magic wand.

Editor’s Note: What Does This Mean for You If You Want to Prevent Cancer? Organically grown foods are produced without synthetic pesticides. And they are less likely to contain dangerous pesticide residues than those that don’t get sprayed with them.

Why are pesticides harmful? We’ve known that working in fields sprayed with pesticides increasesfarm workers’ risks for cancer, early death, and birth defects in their children. And in recent years, the evidence has become increasingly compelling that eating foods grown with pesticides also increases cancer risk for consumers.

A 2008-2009 annual report from the President’s Cancer Panel, titled “Reducing our Environmental Cancer Risk: What We Can Do Now” recommended that, among other things, individuals should choose “food grown without pesticides or chemical fertilizers.”

And other studies have concluded that pesticide use and cancer are linked — particularly in children.

If you want to reduce your cancer risk, choosing organically grown foods can be a good step to take. And it’s nice to know that while you’re supporting your overall health and reducing your cancer risk, you’re also contributing to the safety of farmworkers, the health of the environment, and the ability of our food systems to produce healthy food in the future. (For more on the real impact of organic food production, check out this article.)

But not everyone can afford to eat food that’s grown organically. If going organic “across the board” is too costly for your budget, you may want to focus on which foods are the most important to choose organically grown. (The “dirty dozen” most pesticide-contaminated foods are listed here.) And for tips on how to wash fruits and vegetables to get rid of pesticide residues, check out this article.

If you can afford organic, I encourage it. And if you can’t, then I hope you won’t let that stop you from eating and enjoying a vast array of fruits and vegetables. Let’s not make the perfect the enemy of the good.

Eating more cancer-fighting plants just may be the best thing you can do to prevent cancer. And the side effects include reduced risk of heart disease, Alzheimer’s, and just about every other chronic illness known to humanity.

That sounds good to me.