How to Cure Our Collective Split Personality 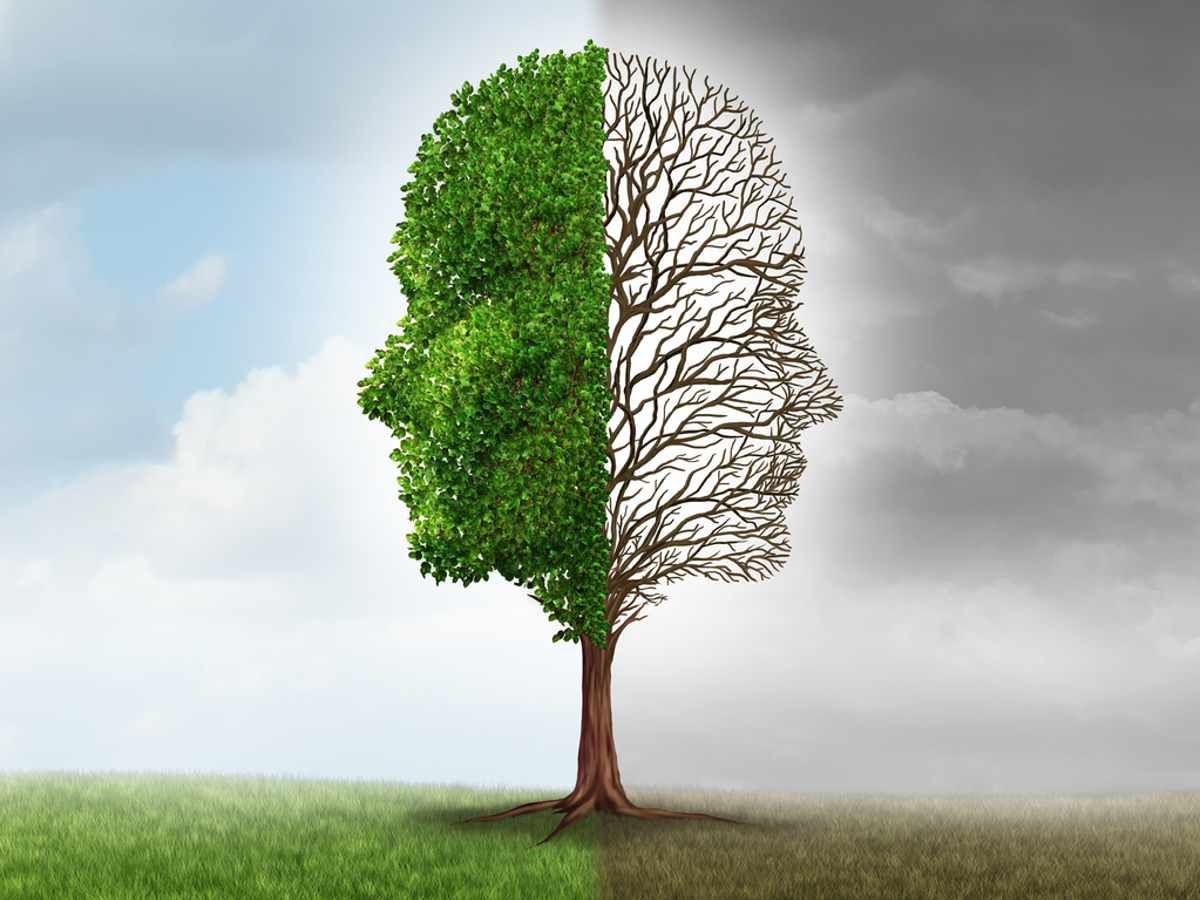 One of the main reasons a sane person feels sane is that reality holds together and makes sense. Billiard balls don’t suddenly turn into elephants; gravity doesn’t cause things to fall down one day and up the next. In current neuroscience, creating a sane reality is the job of the brain—and if you look closely, the job isn’t done very well at all. Not only is there mental disease but also everyday anxiety or depression, false impressions, misunderstandings, and even very strange distortions of reality, as with someone deathly afraid of the number thirteen.

In a recent TED talk, the fallibility of the human brain was discussed by Anil Seth, a cognitive neuroscientist who takes the position that our personal reality isn’t just skewed or eccentric—it’s a brain hallucination. According to Seth, we're all hallucinating all the time; when we agree about our hallucinations, we call it "reality." This is actually a tried-and-true position occupied by people who can’t find consciousness in the brain—an impossible task since the brain is a physical object and the mind isn’t. Assuming that the activity of billions of brain cells is what produces our four-dimensional picture of reality (three dimensions of space plus the dimension of time), basic things like a sense of self aren’t real in themselves. As the byproduct of brain activity, mental perceptions may convince us all the time—after all, we depend on our minds every second we are alive—but they are untrustworthy, unreliable, and ultimately just a hoax, illusion, or hallucination.

Seth, like others in this camp, uses clever examples of how the brain fools us all the time—it can be tricked by optical illusions, for example. Take this far enough, and you wind up with Seth’s logical conclusion: “Our basic sense of being a unified self is a fragile construction of the brain.” What’s peculiar about this conclusion is that it is exactly what the world’s wisdom traditions have been saying for thousands of years. Yet the two viewpoints totally disagree. Neuroscience says we are all a mass of mixed-up perceptions, memories, expectations, and flawed brain processing (like a computer whose software can’t keep up with a flood of data coming in), and therefore we can’t trust the brain’s hallucinations.

In our first post, we pointed out that the chemicals and electrical charges in the brain are not special; they follow simple laws of chemistry and physics that apply to rocks, trees, and clouds. But Seth, like most neuroscientists, is forced to assume that the brain produces the mind because otherwise two outcomes occur that are unacceptable: Either 1.) The mind produces the brain and not the other way around, or 2.) There is no way to prove that brain causes mind or mind causes brain. Rejecting these two possibilities and accepting Seth’s hypothesis leaves us with a unique case of split personality: We become physical things that somehow experience a non-physical sense of self. (If the mind produces the brain, we don’t have this problem, since the experience of a physical thing can easily be a mental phenomenon—think of all the “physical” objects in your last dream.)

Until this whole dilemma is solved, each of us walks around fragmented in some way. An early brain experiment by the pioneering brain surgeon Wilder Penfield proved the point beyond doubt. He inserted electrical probes (painlessly) into the open brains of patients, and by mildly zapping the motor cortex in a specific place, the patient’s arm flew up. The patient would be surprised and say, “My arm just flew up.” But Penfield could also ask the patient to lift his arm voluntarily. In one case, the brain made the arm fly up; in the other case the mind willed the arm to fly up.

In the same way, we seem to inhabit a split world, where reality is brain-based and mind-based at the same time. This intimate, bidirectional relationship between mind and brain hints at a deeper possibility: The duality of mind and brain may be mere appearance. The brain may well be a robust image of one aspect of the mind, or conversely, the mind may be a subtler and more expansive rendition of what we call a “physical” brain. Either way, these possibilities bridge the apparent split between mind and brain, mental and physical, and subjective and objective. We may all be soon talking about the “brain-mind.”

Bridging the split is essential because we aren’t happy with our split personalities. All the flaws Seth and others attribute to the brain do in fact exist, and when we suffer on the inside, the brain can be the reason, and so can the mind. There is no dividing line between the two, which is why countless people suffer chronic pain, for example, that has no physical explanation or cure. Luckily, the brain-mind also brings us joy, hope, art, invention, creativity of all kinds, insight, love, and everything else that makes us human. Does anyone seriously believe that Leonardo’s physical brain alone produced the Mona Lisa, or that Einstein’s discovered relativity?

At a subtler level, the indissoluble union of mind and brain has also played a limiting role in human evolution. As Al Gore once commented direly, human nature hasn’t changed, but technologies for destruction and planetary degradation have leapt ahead. The human brain-mind can be trained into fixed patterns and beliefs, and whether the fixed pattern is religious or scientific, a huge swath of reality is sacrificed in the process. Our brain-minds are constantly filtering out, censoring, and editing the “real” reality, and yet this goes largely unnoticed.

To overcome such crippling limitations, a person must become whole by healing the split personality. The world’s wisdom traditions refer to this as waking up, which involves two steps. The first is stirring from the slumber of the objective/subjective divide, which can be approached secularly by reconciling brain and mind. Once this is accomplished, the stage is set for the second step: No longer fooled by the brain-mind, one wakes up to a new identity as awareness itself. “Enlightenment” is a loaded word, but it points in the right direction. Awareness can break out of confinements (beliefs, conditioning, social pressures, and mental suffering) the same way we break out of the terrors of a nightmare—the moment we wake up, our identity shifts and we drop the burdens of a dream.

Dreams are neurological illusions, yet this fact can be proven only on waking up. If you are already awake in the typical sense—walking around, talking to other people, going to work, etc.—it’s easy to believe that this world is independently real and not another kind of neurological illusion. But the proof is in the pudding: you can wake up from your waking dream just as you woke up from your sleeping dream. The instant this happens, the burdens of pain, suffering, fear, anger, etc. fade. Fortunately, such a claim doesn’t have to be anti-science. Because mind and brain are indissolubly wed, when the mind shifts by waking up, the brain must also change its physical functioning. We’ve known for three decades that this is the case, ever since the first research demonstrated how the brain changes in response to meditation.The benefits of many such introspective practices, including prayer, mindfulness, and yoga, have only deepened. On a practical basis, two of the most damaging disease processes, inflammation and the stress response, are alleviated by these practices. But the real breakthrough will come when the complete process of waking up is acknowledged to be valid, at which point the end of our collective split personality will be in sight.

In wholeness we will reassess what it means to be human and what it takes to heal our wounded planet. As long as human nature remains in its current evolutionary stage, planetary healing will remain a remote possibility. Only wholeness leads to healing, and collective wholeness begins at the individual level. This is the ultimate version of Gandhi’s dictum to become the change you want to see in the world.

Mercury Retrograde! What is that?

Coffee with Kute: Raw and Real Answers To Your Questions

Is Anyone Really Listening to Your Prayers?

4 Spiritual Lessons for Finding a Path Through Loneliness
Optimizing Our Experience
What Would Your Soul Do?
Sacred Warrior: ENERGY IS KEY
Having the Courage to Express Our Vulnerability