The Magic Behind Creation 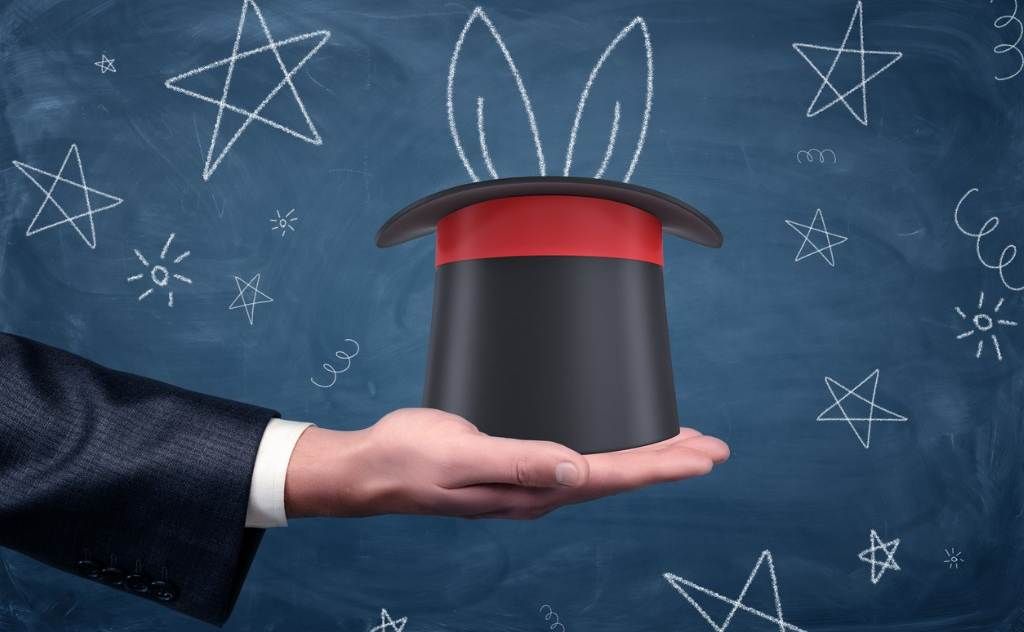 The Magic Behind Creation

Magic is supposed to be a primitive belief, and in modern society it has largely disappeared. Science and technology are not only triumphs of rationality; they represent victories over magic, which is irrational. It is magical to explain thunder as the anger of the gods. It is magical to believe in the story of Creation taking place in seven days as related in the Book of Genesis.

But magic clings stubbornly to a foothold in our lives. Children are delighted by it, and not just children. Einstein said that he was the most unlikely person to discover relativity, but the theory came to him due to a streak of wonder that he had retained from childhood. Wonder is the wide-eyed reaction a child has on seeing a magician pull a rabbit out of a hat, and Einstein claimed that no great discoveries could be made in science without a sense of wonder at Nature’s mysteries.

All of this sounds old-fashioned and quaint now that science has come to dominate our lives much more—inconceivably more—than in Einstein’s lifetime, and if we go back to the life of Newton, we discover that besides being the greatest scientist before Einstein, Newton was a devout Christian with fundamentalist views of creation—he spent years trying to assign specific dates to Genesis and all the events in the Old Testament.

It irritates rationalists to see magic hanging around, just as it irritates atheists to see God hanging around. But there’s a sound reason for magic to persist: without it, creation cannot be explained. Despite our modern devotion to logic and reason, when you look at any level of creation, a powerful magic is at work.

No one knows where a thought comes from, even given the most intensive investigation into the brain. Thoughts are words in our heads, but brain cells don’t speak. No one knows how exceptional gifts come about, such as child prodigies in music like Mozart. No matter how deeply geneticists investigate DNA, a gene can’t play the piano, and the gene that gives a three-year-old the ability to play the piano is beyond explaining.

At every level, creation springs seemingly out of nowhere. This is more than a casual thought. Modern physics deals seriously with the issue known as “something out of nothing.” The something is the universe and everything in it. The nothing is the quantum vacuum state, which is the zero point of creation. In the quantum vacuum state there is no time, space, matter, or energy. There is only the potential for those things.

At some point the vacuum state starts to vibrate, although no one knows why. “Why” is a tricky word in science, and some scientists don’t even consider it valid. Cosmology knows a great deal about what happened during the big bang some 14 billion years ago, but why it happened hardly makes sense. It happened because it happened. This is essentially the whole story of something out of nothing. As ripples spread across the quantum field and other primal fields like the gravity field, the familiar territory of the universe came about.

We have time, space, matter, and energy, the basic setup of creation, because they are there. Without them, existence is inconceivable, quite literally. As the product of time, space, matter, and energy, the human brain is confined within them. The brain radically limits what we can perceive. Dogs and bats hear frequencies of sound that we cannot; eagles see better; foxes hear better, and so on.

Whatever lies beyond your ability to perceive is magic. Until you perceive something, you can’t understand it, and the basic quality of magic is that you cannot see how it is done. You can look upon the magic behind creation with wonder or ignore it altogether. Einstein commented that either everything is a miracle or nothing is a miracle. You can practice a bit of linguistic cleverness and say that “nothing” (the quantum vacuum) is equally a miracle with “everything” (the universe).

These broad generalizations don’t impact our lives directly, but they should. There is magic behind everything in your everyday life. The brain’s ability to produce the visible world is magic, since the brain is totally dark and has no pictures in it. Your next thought is magic, because it comes spontaneously out of nowhere, and there is no physical explanation for thought to exist in the first place—it is not as though the common atoms and molecules in a brain cell should think why the same molecules in a skin cell don’t.

The clash between magic and reason lies behind the conflict between science and religion, but this conflict is unnecessary. Magic is essential to creation, no matter what creation story you apply to it, whether the Book of Genesis or the big bang. Something out of nothing has no rational explanation, and yet being rational creatures (some of the time), humans need a way to live with magic that isn’t simply dumbstruck wonder.

This need links so-called primitive creation myths and modern cosmology—once you adopt either of them, you can live comfortably with magic. Your daily life can proceed without being struck dumb—usually with fear—by the next thunderstorm. The ability to be comfortable has its limits, though. Nature lords it over us with power we cannot control. Lightning, tsunamis, and earthquakes must be tolerated, both in prehistoric times and now.

However, destructive magic and the magic behind creation are the same; they both can be traced back to something out of nothing. To come to terms with this magic, creation stories aren’t good enough. When you see a child prodigy, a newborn baby, Hubble telescope photos of supernovae exploding, or proof of black holes, it’s not sufficient to say, “There goes the quantum field again, rippling away.”

The human urge to understand everything won’t be satisfied until we penetrate the veil of magic. Reality is unsatisfactory it we are forced to admit total bafflement in the face of creation, particularly if that bafflement extends to everything, big and small, in the universe. Penetrating the veil of magic leads to understanding how stars, life on Earth, evolution, the human brain, and your next thought are created. The challenge is huge, and we will take it up in our next discussion.

Reprinted from SF Gate with permission

Where Do You Call Home? A Cosmic Answer

Reality Is Structured in Consciousness

How Does Something Come Out of Nothing? A Cosmic Tale