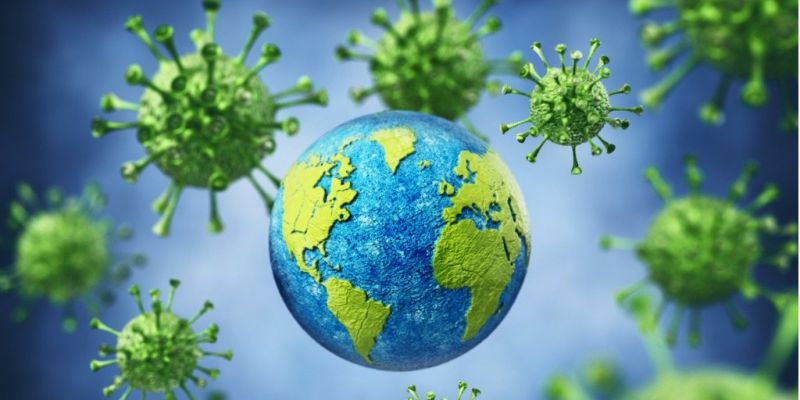 When your mind and heart are truly open abundance will flow to you effortlessly and easily. - Deepak Chopra

The global pandemic has disrupted everything we call normal life. The disruption has been so catastrophic that there is fear among experts that this is only a “starter pandemic.” COVID is less infectious than the measles and less fatal than SARS. Instead of using this fact to stoke fear, we can do a great deal to heed COVID’s wakeup call.

A new way of looking at life itself holds out hope and optimism, because the popular image of deadly viruses assaulting humans like microscopic aliens is incorrect. Microbes are the very basis of life. We interact with them constantly, and much more than 99% of the time life is enhanced. Every advanced life form, including us, has microbial DNA woven into its own genome. A vast colony of bacteria known as the microbiome together with viruses (the virome) and fungi (the mycobiome) that inhabit every animal’s digestive tract, and when it comes to mammals, the microbiome not only makes digestion possible, but it connects us to the planetary biome—the totality of viruses, bacteria, and fungi that truly rules the earth.

It is a very benign rule. Look around at the astonishing diversity of life that evolution has produced. Evolution in higher life forms is the visible outcome of activity in the planetary biome. To keep the creation of new life beneficial, as it has been for billions of years, the first lesson of the new model is to realize that we are life itself. Our actions affect Nature directly in ways that either enhance life or lead it into destructive patterns.

If we look at COVID as a response, or even a message from the planetary biome, what is the message about? It is about disruption and imbalance. The microbial world responds quickly, at times instantly, to aberrant conditions. Fortunately, it can also respond quickly to rebalance itself, since balance is the natural tendency of every level of life.

Human beings are responsible for imbalance and disruption in many ways, most of them the product of modern life. We can begin with viruses. The earth has a global virome, which is currently being mapped at Stanford. This Earth database, once completed, which also allow us to identity the viruses in the human virome.

As in the human virome (and the microbiome and mycobiome), there can be dysbiosis, when one microbe goes out of balance and becomes opportunistic, amplifying itself at the expense of others. On a larger scale, humans, among all mammalian species, are being opportunistic as we remove forests and wetlands and pollute the land and oceans, leading to an unprecedented rate of extinction of species.

The novel COVID virus was most likely introduced into humans from other mammals as we insist on eating food from species that are too close to our genetic makeup (a notorious example being China’s so-called wet markets).  By design in our evolution, the human microbiome prefers plants (our teeth, stomach acid, colon structure, and our need for plant fiber to feed our gut microbiome all support this conclusion).

The consumption of animals, especially mammalian species that are genetically more similar to humans, leads to putrefaction and microbial dysbiosis. As we make ourselves sick, we also propagate the production of opportunistic bacteria that disrupt the earth’s microbiome. Through the same meat diet we also propagate viruses and fungi that disrupt the earth’s virome and mycobiome. Our disruption extends to inducing and accelerating new mutations across all species on Earth with increasing levels of pollution at the chemical, electromagnetic, and radioactive levels.

As essential as electricity is to modern life, our pollution-generating activities accelerate mutation in ourselves as well as in life forms below us. We, and the planet as a whole, are healthiest when we create maximal evolutionary and genetic distance in our food chains. “Genetic distancing” is now needed more than ever. Otherwise, our many activities that pollute the earth first accelerate the introduction of new mutations in viruses and bacteria in ourselves and in other mammals (we aren’t the only species susceptible to COVID, for example). Then we eat these other mammals and disrupt our own microbiomes with new infections, some of which are potentially fatal.

The message from the pandemic won’t be received immediately or completely understood and accepted. But hope arises because the planetary biome is the true foundation of life and the ecology that entangles all living things. Humans are the pivot point, now and in the future. We are the mirror of the earth and of life itself. A conscious alliance with the evolutionary gifts of the biome opens the way for a future free of pandemics and many disorders that can be treated from the microbial level on up to cells, tissues, and the whole person. The potential in medicine alone is enormous. What we need to do now is to take this new model seriously and to learn how best of live as part of the planetary biome.

Dr. Rudolph E. Tanzi is the Kennedy Professor of Neurology at Harvard Medical School and Vice-Chair of Neurology and Co-Director of the McCance Center for Brain Health at Massachusetts General Hospital. Dr. Tanzi has discovered numerous Alzheimer’s disease genes, including the first one, and is developing new Alzheimer’s therapies using human mini-brains pioneered in his laboratory. Dr. Tanzi has published 600 research papers, received numerous awards and was on the 2015 TIME100 Most Influential People in the World list. He has also co-authored several books, including “Decoding Darkness” and three bestsellers with Deepak Chopra: “Super Brain”, “Super Genes”, and “The Healing Self”. In his spare time, he plays keyboards with guitarist, Joe Perry of Aerosmith and other musicians.