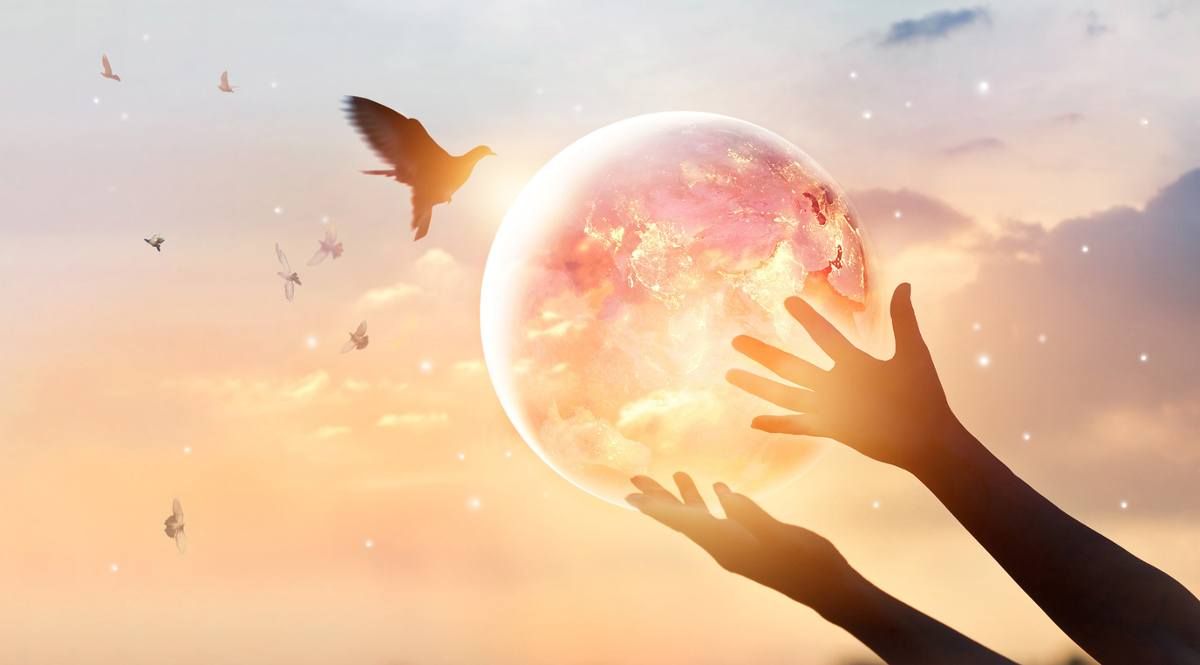 Famously, the Book of Genesis opens with the presumptuous statement that, “In the beginning … God created the heavens and the earth” (Genesis 1:1). This very first line of the Bible has put the Christian faith – or any other faith for that matter – in direct contrast with the scientific worldview, which states that everything is created by chance and that matter is all that exists. Between both irreconcilable ideologies, there lies a world of endless possibilities to explore that may shed a more comprehensive light on the extraordinary nature of our existence.

The materialistic vs. spiritualistic worldview has been a source of much dispute between scientific hardliners and religious fundamentalists. To figure out which of the two is more credible, let’s take a closer look at both positions.

According to scientists, our universe started off with a Big Bang that created all mass, out of which solar systems, planets, humans, etc. came into existence through gradual evolution. That is in all likelihood what happened, but scientists are unable to explain how from the very moment the explosion occurred, certain regularities were established that were indispensable for our planet and, indeed, the whole universe to exist. They are what scientists call the physical constants and they have stayed pretty much the same all over the known universe from the onset of its tumultuous creation.

These fundamental regularities, such as the speed of light, the mass of an electron and the gravitational constant, are so ingeniously constructed that small changes in any of them would have meant that life on our planet would be impossible. To quote the late physicist Stephen Hawking from his groundbreaking book, A Brief History of Time, “If the rate of expansion one second after the Big Bang had been smaller by even one part in a hundred thousand million million, the universe would have collapsed before it ever reached its present size.”

How can scientists possibly begin to attribute this ingenious design to mere chance? Did we just happen to win the universal lottery a couple of billion times in a row? And did intelligent life somehow randomly appear out of this primordial soup, like a whirlwind that could go through a pile of rubble and leave behind a beautifully constructed cathedral if it were given enough time?

It would seem that the scientific standpoint that this universe was created randomly is entirely negligible; its build-up is simply too accurate to be relegated to chance. Surely it makes a lot more sense to attribute such an intelligent design to an intelligent designer? This conclusion brings us directly within the realm of religions.

All major religions believe in the existence of a divine architect, and most of them seem to think that a human omnipotent being is responsible for creating the universe. If that is indeed the case, what about all the other life forms out there that are equally complex, like the billions of bacteria that work hard to keep us alive every day or the pods of whales that communicate through subsonic sound waves? Were they all just created for our survival, for our amusement or for our bewilderment? Are they all random feats of nature while only our blessed species is part of a grand design?

If humans truly are a reflection of god on Earth, who was our god when the dinosaurs roamed the planet? Was god a T-Rex then? Or was our anthropomorphic god patiently sitting by and waiting for the right time to introduce his spitting image onto his world? And why didn’t he act sooner? Why did it take the almighty god billions of years to get us here? Because, let’s not forget, if the history of our planet is a twenty-four hour clock, we humans would make our appearance only in the very last minute. If god really is the coach that puts mankind central in his grand game plan, why did he wait so long to bring us in?

In the vast grey zone between the two dualistic and incompatible worldviews, a more comprehensive explanation for the ingenuity of life’s design can be found that is in line with both the spiritualistic outlook and with scientific findings. Recent discoveries in quantum physics show that the tangible reality of our everyday lives is some kind of carefully and ingeniously crafted illusion, a field of infinite possibilities with a deeper order of existence hiding beneath it.

This primary level of reality gives birth to all the objects and appearances of our physical world and connects everything via an invisible web of direct communication by way of quantum entanglement. Every conscious being within this intricate field of possibility subtracts information from an underlying cosmic memory and feeds back to it via experiences, observations and mental processes. This information, in the form of holographic traces that all beings leave behind in the universal field, meticulously coordinates all elements that are part of it and may explain the astonishing degree of coherence we find everywhere we look.

However outlandish this perspective may seem, it is firmly grounded in scientific research and is in line with the core concepts of all major religions and spiritual teachings.

Instead of clinging on to the extreme viewpoints of two idealistic opposites, perhaps it’s time we embrace one consolidated vision of reality: that of a supreme collective consciousness in a field of infinite opportunity. We are not isolated beings in a random composition, but are a creative part of a jointly coordinated design, and together we are responsible for shaping our world. It’s about time we start doing it right.

Subscribe to updates from author Unsubscribe to updates from author Simon Vandekerckhove
Simon Vandekerckhove grew up in Bruges, Belgium. He spent a few years abroad studying in Spain, teaching in Thailand, working around Australia and backpacking through South America. Throughout his journeys, the symbolism and coincidences he’s experienced have widened his perspective to both the physical and spiritual dimensions. Now he feels it’s both his duty and obligation to share the lessons bestowed upon him during his years of travel and provide some guidance to others who are ready to cross the threshold of their comfort zone in search of exploration and adventure. Twitter: @pathstopacha #pathstopachamama Instagram: @paths.to.pachamama Facebook: pathstopachamama

More posts from author
Wednesday, 08 August 2018 The 4 P's on how to become a conscious creator: Persuasion, Practice, Positivity and Play