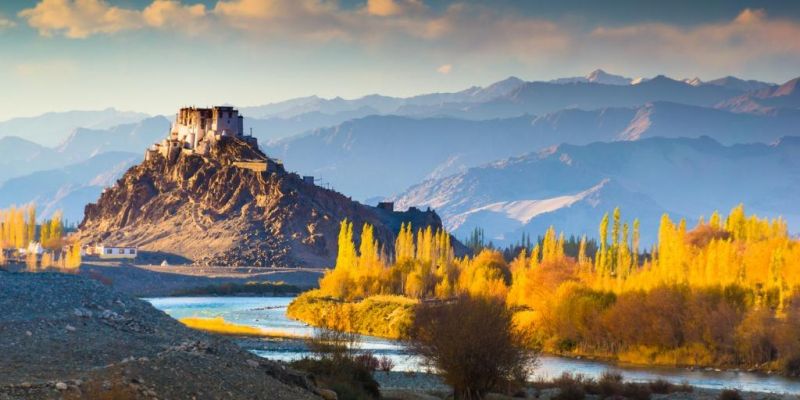 Ladakh is a mountainous, Tibetan Buddhist haven located in northern India, bordered by the Himalayas in the south and the Kunlun mountains to the north. Ladakh is nestled closely between Pakistan, China, and of course, India. It is in very close proximity to Tibet, hence the large population of Tibetan Buddhists in the area.

As described by UNESCO, “The region constitutes a Cold Desert biome with harsh climatic conditions, which can be attributed to two factors. One is its location on the leeward side of the Himalayas, which makes it a rain-shadow zone inaccessible to the annual southeastern monsoon winds that sweep the rest of the country, thus creating desert conditions with low levels of precipitation. . .These physiographic peculiarities and ensuing harsh climatic conditions have led to the emergence of a unique Cold Desert ecosystem as well as Culture of the community, which is unlike any other in the world.”

While many might be aware that India contains a cold desert cultural landscape, it’s incredibly beautiful, and even surreal as compared to the rest of India, a country often noted as hot, humid, and overall, tropical.

Author and activist Andrew Harvey, who is leading our June 2021 journey through Ladakh, wrote a bestselling book called A Journey in Ladakh which describes the region as “a remote part of the world – the highest, most sparsely populated region in India, cut off by snow for six months each year. It is in the mountains of Ladakh that Buddhist meditations have taken place since three centuries before the birth of Christ, and it is there that the purest form of Tibetan Buddhism is still practiced today.”

Indeed, Ladakh is one of the most elevated and coldest regions in the world, so cold that it can only be accessed in the warmer months. When viewing its landscape, onlookers gain the feeling that they’ve arrived in a distant, icy planet, and one inhabited by the unique culture of the Tibet Buddhists.

The Tibetan Buddhists use a plethora of colors, symbols, instruments, and rituals—the same ones they’ve been using for centuries—to fare better on their roads to enlightenment. For example, Chod, known as “cutting through the ego,” is a ritual that aims to place practitioners through states of unpleasantness via song, music and visualizations. The practice is meant to expose (and have practitioners face) the fear and hindrances blocking the path to enlightenment, and eventually, to bodhisattva-hood.

As described in our Ladakh tour description, “The Way of the Bodhisattva (an enlightened being who offers up his/her life in the service of all beings) is one of the goals of tantric Buddhism. It is brought about by focusing one’s heart and mind on the benefit of others and utilizing tantric meditation techniques (sacred science) to illuminate the practitioners’ heart-mind, thus becoming a vehicle in service of this intention.”

Most people visit Ladakh for its unique “human landscape,” complete with the Chod rituals, gorgeous temples, and Hemis Festival, an annual celebration full of ritual dance, Tibetan masks, and cultural dress. Most structures around Ladakh Buddhist Gompas. These are ecclesiastic temples of learning and meditation established by various kings and scholar lamas throughout the centuries.

The Gompas are marked by their forecourts where ritual and mask dances (such as those performed at the Hemis Festival) take place. Gompas also often include assembly halls, a room for the chair of the owner of the monastery and sacred image from the Buddhist pantheon, and a room or multiple rooms for monk’s belongings.

From the outside, the Gompas appear to blend well with the surrounding landscape. They’re earthy in color and contain almost mountain-like structures that bring to mind the monk’s closeness to the earth in a place often considered to be the most isolated in all of India.

While the colorful, spiritual, and cultural activities of the people of Ladakh present an unforgettable (and entirely unique) side of India, visiting for its landscape, with it’s snow-capped mountains and beautifully barren otherworldliness, makes Ladakh equally worth the trip. As further described by UNESCO,

“These physiographic peculiarities and ensuing harsh climatic conditions have led to the emergence of a unique Cold Desert ecosystem. . .which is unlike any other in the world. The Cold Desert has been declared a Biosphere Reserve of India and comprises an ecosystem of unusual scientific and natural interest. It is home to several rare and endangered species of flora and fauna, especially the Snow Leopard, Tibetan Antelope and Himalayan Wolf, which are included in the Red List of IUCN as Critically Endangered Species. The variety of flora found here has been used traditionally for various purposes by the community including medicinal, and is deemed to be of Outstanding Universal Value for the purposes of conservation.”

UNESCO continues by explaining that Ladakh’s landscape is infused with both Tibetan and Indian influences (it containing a “trans-Himalayan marginal plateau land and edge region between the Greater Himalayas of India and the main Tibetan Plateau”) that make the place unparalleled in cultural heritage and spiritual practice.

With a quick visit to a map, one sees that Ladakh is practically on the outskirts of Tibet yet still close to India’s more frequently visited mountain towns such as Dharamshala, home of the Tibetan Institute of Performing Arts as well as the home and refuge of the Dalai Lama.

In India, a country that stretches far down toward the equator and far up near the cold, barren region of Tibet and the Himalayas, pilgrims have every reason to believe they’ve reached the promised land of pilgrimage through spirituality and culture, yes, but also through India’s surreal natural landscapes as well (such as that of Ladakh).
__

All photos in this article were taken by our past participant, Andris Barblan.