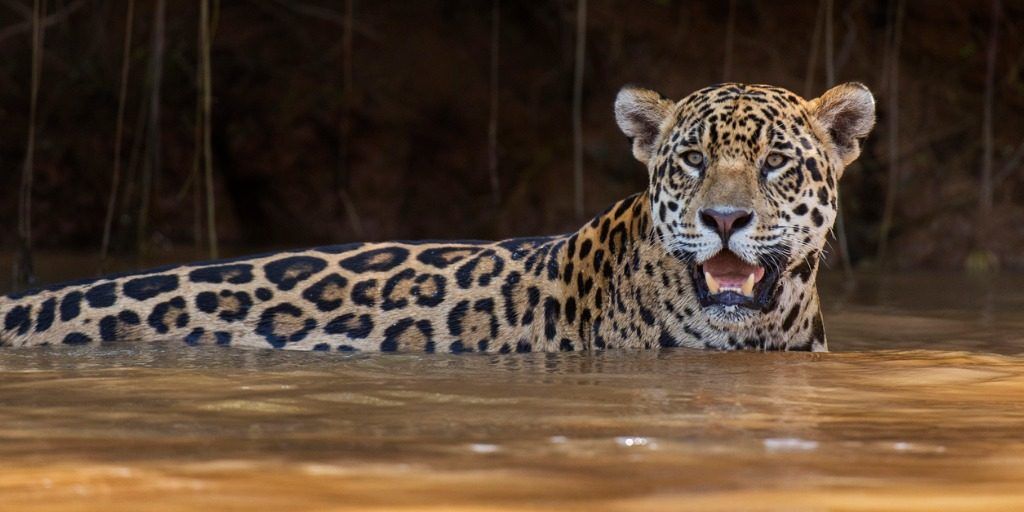 In August 2017 I was back in the Amazon rain forest on a Pachamama Alliance trip,  I was paddling a two-person kayak up the Capahuari River near the Kapawi Lodge with a woman who went simply by the name “Z”.

She broke the silence. “There’s something swimming in the river.”

“Probably that tapir some of the Achuar saw near here yesterday.”

I froze, my paddle suspended above the kayak. My heart raced.  Slowly, cautiously, I lowered the paddle to rest on the kayak and leaned forward to peer around her.

A band of white water cut across the river, the wake of something swimming. I raised a hand to shade my eyes and followed the white water. Then I saw it: the black-spotted tawny-colored  head and shoulders of a full-grown jaguar, just yards ahead of us, swimming to the river bank. Our momentum was taking us rapidly toward it. I grabbed the paddle and stopped the canoe’s forward motion.

Without breaking its rhythm, the jaguar turned and looked at us; then it continued to the shore, climbed out of the water, shook itself, gave us another glance, bounded up the embankment, and disappeared into the tangle of foliage.

A flock of terrified turkey-sized hoatzin birds flew out of the trees and over the river, desperate to escape.

Later that day, a group of Achuar men took me in their dugout canoe to show them the place where the jaguar had left the river. Sitting behind me was one of the men who years before had attacked a plane I was on and tried to kill Yahanua, because she was Shuar. He now was married to a Shuar woman. Symbolic of the changing times, intermarriage between these two cultures, fierce enemies for hundreds of years, had now become common.  They had truly touched their jaguars.

The canoe arrived at the muddy bank of the river. One by one, the Achuar stepped out and placed their hands on the jaguar’s claw marks in the mud.

“We’re touching the jaguar,” one of them, the youngest, said. He helped me from the canoe and encouraged me to lay my hands on the prints.  “In these tracks, feel the jaguar that blocks your people,” he advised.

After we returned to the canoe, I asked what he meant by that.

“A jaguar blocks your people from changing, from stopping actions that are destroying these forests – and the world.”

Those words were so familiar and yet at that moment they seemed more powerful than ever before. Perhaps it was the fact that I had just come very close to a real jaguar and had touched its tracks that impacted me, or perhaps it was the voice of the young Achuar man. Whatever it was,  it reminded me of the descriptions I’d read of ancient cultures that honored the jaguar for its power, valor, physical strength and mental awareness. I thought of the Achuar who today see the jaguar as a symbol that encourages us to face our fears, break through barriers, and determine our paths to the future. I thought about the Eagle and Condor prophecy, the Mayan prophecy of 2012, and the Shuar legend of Etsaa and the Evias. And about the recent unification of Amazonian peoples who had been enemies for centuries – until they realized that the thing they most feared was the invasion of their lands by foreign companies, not their neighbors. Every one of these stories and events emphasized the power of humans to alter reality by changing perceptions, embracing new values, and taking actions.

Sitting in that Achuar canoe, I understood that these stories had come to the modern industrialized world at a time when confronting our fears and turning them into actions that create personal and global change is essential to our very survival.

An excerpt from my upcoming book Touching The Jaguar (publication date: June 30, 2020)