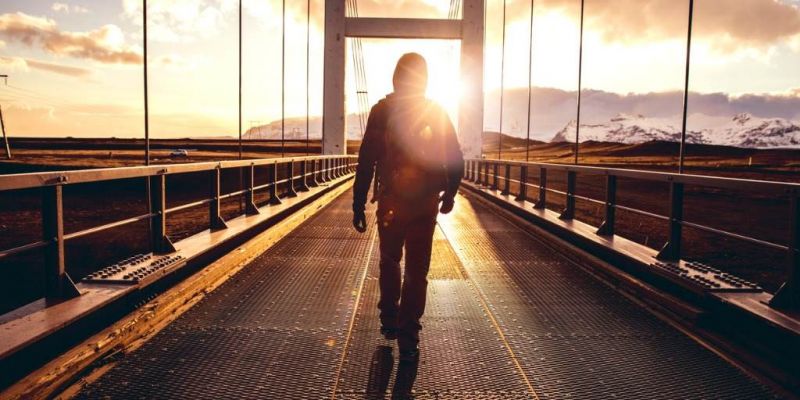 A gateway to a new and exciting understanding

Whenever you come upon a healing idea or a rescuing truth, it is almost always a surprise that you could have missed something that was so obvious for so long. Do you know the feeling? More than anything else, a glimpse of a Timeless Truth is a lot like rounding a bend and suddenly seeing something you know you knew a long, long time ago; like discovering all over again a special place you once loved.

​You can't explain it but these out-of-the-blue higher moments seem as much a trusted memory as they do a gateway to a new and exciting understanding. Our life is intended to be filled with magical moments such as these. Settling for anything less is an unseen compromise that suffers the Spirit. This is why the real successes in life are more an awakening than they are an arrival at a thrilling but temporary destination.

Let the following short story stir you to remember something your true nature has never forgotten.

​It seemed he had been walking for a very long time. But even more than his weary legs he was aware of his hands. They were starting to feel like they were part of the bags he was carrying.

​"This is no better, " he thought to himself, as he tried to shift some of the baggage's weight from one aching part of his hands to another. He wished he could put them all down, but he was in a hurry.

​It was hard to believe that only a few hours had passed since he had run into that nice man selling bags along side the road. The bag-seller had promised him that buying one of his bags would make carrying all of the other bags a lot easier. But, as he walked along, he could think of a lot of other words to describe what the addition of this new bag had done for him. "Easier" certainly wasn't one of them. And this wasn't the first bag he had been sold along the road. Not by any means.

​As he looked down at his stiffening arms and hands, it seemed to him as though every bag he was carrying had been guaranteed for one thing or another. He had a bag of plans for the future; a bag that held keys to success; a bag of miscellaneous kits for repairing the past; and then there was the heaviest bag of all:  The one that was supposed to keep all of his other bags safe. The truth was he owned a bag for just about everything imaginable.

​So involved was he in assessing and reassessing the value of all of his bags that he didn't even notice the stranger sitting in the shade off to the side of the road. In fact, it was the stranger's voice that made him look up from his bags. The stranger smiled.

​"That's quite a load you've got there. Care to sit a while and take a break?"

​The notion surprised him for some reason but it sounded like a good idea. "Thanks," he said, "I think I will."  And he sat his bags down, one by one, lined up according to their size. A moment or two passed without either of them speaking, but it wasn't uncomfortable. The grass was soft and just damp enough to feel good. The only thing strange was that he noticed the stranger didn't have any bags with him at all. Not one. To the best of his recollection this was a first. All of the men and women he had met along the road carried some kind of bag. How could he survive? What kind of person was this? How did he meet the challenges of the road? His mind started racing with one silent question after another, but he knew it would be too impolite to say anything. He couldn't believe his own ears when the words jumped out of his mouth.

​The stranger smiled back at the man. "No, that's right."

​The man waited for further explanation but none came. Finally the silence became too heavy. "Why not?" he asked.

​The stranger had heard many questions like his before from other travelers he had met along the way. Experience had long taught him that most of these questions placed before him by others -- as to why he traveled so lightly -- were not asked in order to hear his answer. No. Most only feigned interest. What they were really seeking was a way to tell him their view on the subject. But he sensed that this weary man across from him was different from the rest. And so he answered him with the truth.

​"One day, years ago, I was taking a break in a shady spot just like this one when a familiar voice spoke to me. I knew I had heard that voice at least a thousand times before and yet, right up to that moment, I had never really heard it."

​"No one," the stranger replied and looked back at him with a deep kind of self-conscious smile. "I was all by myself. And I don't know why I should have taken notice of it just then, but that's when it happened. I realized that for as many years as I cared to remember, I had been talking to myself about how tired I was."

​The stranger's answer came as an unexpected shock. He wanted to pity this empty-handed man but instead he was drawn to him and to what he was saying. His silence was the invitation for the stranger to continue talking.

​"At first I tried to push my sorry realization away by thinking about another bag I had always wanted. But by this time I was even tired of those feelings. I didn't know what else to do so I just sat there. I can't really say for how long. And then it came to me."  The stranger smiled again and the man thought that maybe he had missed something. But if he had, the stranger didn't pause long enough for him to ask. "It wasn't so much that I didn't feel like going anywhere as it was I had realized, while sitting there, that for all of my years on the road I had never really known where I was going. Only until that day I never knew that I didn't know because, for all of those same years on the road, I had come to believe that my search for relief was the same as having a direction in life."

​"But why were you seeking relief; I mean, what from?"

​"That's the crazy thing," the stranger said starting to laugh quietly to himself as if he had heard a good joke. "I was looking for relief from all the baggage I was carrying -- bags that were supposed to make my walk through life an enjoyable one!"

​Now they both laughed the good laugh like two old friends who were in on a private joke. The warmth of their shared understanding was still there when the man broke in. "But where are your bags now?"

​"That's the whole point," replied the stranger still with a smile on his face. "Don't you see? If I didn't know where I was going then how could I possibly know what I needed to get me there?" It was his eyes that asked for a reply.

​"Right," the man said before he knew it.

​"So then, why on earth was I carrying all of those bags? The truth is that I couldn't come up with any good answer so I just left them right there where I had been sitting."

​"Well, what happened next? Where did you go? How did your life change?"

​The stranger's look stopped his flood of questions. "It took some time but gradually I began to see that it wasn't so much my life that was changing as it was that my view of life had changed. Without the burden of all of the bags I had been carrying I started seeing life as a wonderful place to be instead of a task to go through."

​The man could sense the truth in the stranger's words and he wanted more explanation. "A wonderful place to be?"

​"Yes."  The stranger started to get up and brushed the leaves from his pants. "For one thing, I found that I was always right where I wanted to be once I stopped making myself miserable for not being where I thought I should be." He looked directly at the man. "The truth is, you don't need to be who you think you have to be. Therefore, you don't have to carry those things through life you think you need to make you that person." And with that the stranger said, "See you later," and started walking away.

​The man bolted to his feet, "Where are you going?"

​The stranger didn't reply but he wasn't rude.

​The man looked down at the long line of his heavy bags and looked back up at the light step of the stranger as he walked down the road. It only took another second for him to make up his mind. "Wait for me!"

​Think of all the things you feel as though you need to carry through your life in order to keep your life going according to the way you think it should go. Now think how nice it would be to let go of all of that.